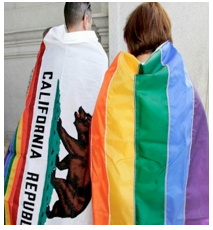 CIVIL RIGHTS - Unless and until Nate Silver gets in the business of handicapping the work of judges, predicting the outcome of Supreme Court cases will remain a risky proposition.

That said, there’s good reason to be optimistic that the Roberts court will bow to the growing public acceptance of same-sex marriage and find a way to sustain gay unions in the two landmark lawsuits (Hollingsworth v. Perry and Windsor v. United States) set to be argued before it March 26 and 27.

But there’s also good reason to temper the optimism and keep the champagne on ice, because the court isn’t likely to declare a nationwide constitutional right to same-sex marriage, and the rulings it issues likely will not be unanimous. Instead, the court will hand down narrow and sharply divided opinions that will boost the cause of marriage equality but leave the ultimate goal of an unfettered right of all consenting adults to wed unrealized.

Of the two cases, the best opportunity for a broad constitutional advance rests with Hollingsworth, involving the validity of California’s Proposition 8, the November 2008 ballot initiative passed by the state’s voters that amended the California Constitution to restrict marriage to heterosexual relationships, and in effect annulled a state Supreme Court ruling that had declared such restrictions unlawful.

The case has made its way to the Roberts court on a petition filed by the proposition’s proponents, headed by Dennis Hollingsworth, a former California State Senate Republican minority leader, and the umbrella group ProtectMarriage.com, a coalition of well-funded right-wing political and religious organizations united in a sacred mission to save traditional marriage and whose ranks run the gamut from nominally secular outfits like the Family Research Council to the Catholic and Mormon churches.

Standing against that imposing coalition as the “respondents” in the case are the city and county of San Francisco and two otherwise unassuming gay couples— Kristin Perry and Sandy Stier from the Bay Area, and Paul Katami and Jeffrey Zarrillo of Burbank.

Ordinarily, such a ragtag crew might expect to be outgunned and overmatched in a high-stakes, high-drama constitutional showdown in front of a court that may well be the most conservative the country has seen since the early 1930s.

Indeed, two of the court’s five Republican appointees—the increasingly unhinged Antonin Scalia and his silent sidekick Clarence Thomas—have previously telegraphed their hostility to gay rights. In a blistering 2003 dissenting opinion in Lawrence v. Texas, which Thomas and former Chief Justice William Rehnquist joined, Scalia not only voted to uphold Texas’ sodomy law (which the decision struck down), but, in words that seemed culled from the mid-19th century, railed against the “homosexual agenda” that in his words sought to deny the citizens of Texas their right to criminalize sexual behavior deemed “immoral and unacceptable.” In December, Scalia reiterated those views in a lecture at Princeton University.

But Hollingsworth is no ordinary case, and even if their victory won’t be total or unanimous or apply directly to states other than California, the respondents have a better than even chance of persuading the court as a whole to overturn Proposition 8. This is true partly because Justice Anthony Kennedy, a Republican appointee who has provided the swing vote in some of the court’s most contentious cases and wrote the majority opinion in Lawrence, remains on the bench. It’s also true in part because of the high-priced legal talent the respondents have working for them (the team is led by famed litigators David Boies and Ted Olson) and because of the more than 50 amicus (friend of the court) briefs that have been filed in the matter in support of marriage equality.

In the last analysis, however, what gives the respondents their greatest measure of hope is that no court, the Roberts included, is immune from inevitable historical change. Hollingsworth and Windsor too (regarding the validity of the federal Defense Against Marriage Act) are history in the making. With recent opinion polls showing dramatic shifts in favor of recognizing same-sex marriage in nearly all segments of society and with no credible basis for continuing a form of discrimination that is both invidious and backward, the cases are the legal equivalent of too big to fail.

In 1954, in Brown v. Board of Education, a progressive Supreme Court acted with one unanimous voice to outlaw segregation in public education everywhere. In so doing, the court got out in front of the rapidly unfolding civil rights movement.

This time around, on the issue of same-sex marriage, a very different court won’t be in the vanguard of a new era of equality. To the contrary, the court will be pulled into that time by the cases now before it, reluctantly and with an angry kick from Scalia and a soundless scream from Thomas. But it will be tugged nonetheless. The only question is how far and how much yanking will remain to be done in the future.