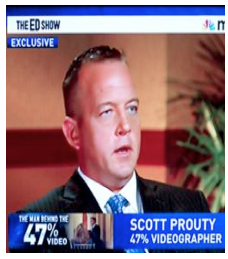 BLOG SOUP - Romney really was exactly what he appeared to be.

And it was very foolish indeed not to hide it better:

The bartender who secretly filmed Mitt Romney's infamous "47 percent" remarks at a Boca Raton fundraiser last May had an idea of what the former Massachusetts governor and GOP presidential nominee was really like. The two had crossed paths before.

The filmmaker tells The Huffington Post that he had actually met Romney at a previous fundraiser, held months before at the home of private equity manager Marc Leder. At that event, which included drinks and a quick speech by the presidential candidate, the would-be filmmaker also tended bar.

He and Romney shared a typical bartender-to-patron moment.

"I handed him a diet Coke with lemon on it," the filmmaker recalled, "because I was told that that's what he drank."

Romney didn't acknowledge his server at all.

"He took it and turned and didn't say anything," the filmmaker explained. "I presented him the exact right drink that he wanted ... Had it there, sitting there on a napkin. He took it out of my hand and turned his back without a 'thank you' or anything else."

The little people have cameras and everything. Best if the rich folk think twice.

The filmmaker said that he had worked a party where Bill Clinton was the guest and Clinton had gone out of his way to meet and greet the servers. Smart politicians understand that everybody has a vote. Decent human beings always thank the servers. Romney isn't either.

Oh, and apparently this fellow, whose name is Scott Prouty, also saved a woman from drowning. Some people just have the luck to be in the right place at the right time and the courage to do what needs to be done. (Some people would call them heroes.) You can read all about him in this piece by David Corn.

(Digby is the pseudonym of progressive political blogger Heather Parton from Santa Monica, California who founded the blog Hullabaloo … where this commentary first appeared.)
-cw