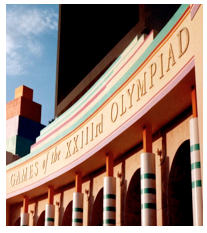 THE CITY - Mayor Antonio Villaraigosa and City Council have decided that Los Angeles is interested in hosting the 2024 Olympic Games.

Never mind that the public was bypassed.  The City Council’s motion was rushed to the agenda one week after it was introduced, and passed, you guessed it, unanimously.

Hosting the Olympic Games may intuitively seem to be an event that would boost any city’s economy.  The firms that will be hired to prepare economic projections will make sure we have the carefully-massaged numbers that prove it.

Athletes have the singular goal of winning, and some take performance enhancing drugs to give them an advantage.  Similarly, the few business leaders who stand to profit most from the games are focused solely on winning the bid inside a very nasty, political, and sometimes corrupt process.  Consequently, they always juice up their reports by overstating the benefits and understating the costs.

Following the financial disaster that was the 1976 Montreal games, Los Angeles was the only bidder for the 1984 games, which gave it leverage with International Olympic Committee.  A skeptical Councilman Bob Ronka got the voters to approve a City Charter amendment that prohibited the use of public funds for the games.

Montreal city officials projected the cost of the event at $124 million, but it ballooned to $2.8 billion.  It took 30 years to pay off the debt, so the real cost was closer to $10 billion.

The 1992 Barcelona games went $6 billion in the red.  Athens and Greece estimated that the 2004 games would cost $1.6 billon.  The final bill was $16 billion, and we know what happened to Greek economy afterwards.

In 2005, London estimated the cost of hosting the 2012 games at $3.8 billion.  By 2009 it was already up to $14 billion.  Today, there are still disputes about the final totals.  Government officials swear they “held” the costs to $14 billion, but independent sources push the number higher.  A Sky News investigation pegged the cost at $18-37 billion.

The reason it’s so difficult to get a single number is that in the end each local organizing committee calculates only its own direct costs.

Absent are the costs for infrastructure improvements, loss of normal spending by locals and visitors, etc.

In London there were additional costs that aren’t found in organizing committee’s numbers, such as paying off the unions not to go on strike, and bringing in the military when the security contractor couldn’t hire the required number of qualified people.

If local police aren’t paid overtime, which would be another hidden taxpayer expense, they are at least diverted from other duties.

Perhaps the most serious flaw in the build-to-suit economic reports is that they label many huge costs as “benefits.”

In ordinary times, voters might be reluctant to raise taxes or sell bonds to fix roads, build new transit facilities, and build affordable housing.  But when sports are involved, spending money on such projects becomes easier to do.

Just one of the requirements for being considered is that Los Angeles will need to have an Olympic Village that holds 14,000 people.

In preparing for the 2010 Winter Olympic Games, Vancouver spent $6 billion on infrastructure improvements, but only one-tenth of that was specific for the games.

When the post-event economic reports are prepared, these projects show up as benefits of the games, not expenses of the taxpayers.

History has recorded that the 1984 Los Angeles games produced a small profit.  That may be true if you only look at the books of the organizing committee.

A study by two university economics professors found no economic benefits left behind in L.A.  The temporary jobs disappeared when the flame was extinguished.

What government always overlooks in its zeal to spend public money for the games is what else it could have used the money for, such as building hospitals, schools, or providing incentives to help businesses grow and create jobs.

Some cities justify the costs of the games as a means to “put their city on the map.”  Certainly, Los Angeles isn’t one of them, nor was London.

Andrew Zimbalist, professor of economics at Smith College, is supported by other independent experts in concluding that there is “scant evidence” that huge sporting events like the Olympic Games have a positive economic impact.

This column is not to discourage Los Angeles from bidding to host these events, but rather to underscore the importance of doing so with its eyes wide open, in collaboration with the public, and using real-world projections.

The public needs to push its way into the process now by insisting that the economic reports that will precede submission of the formal application are honest.  The public needs to play a watchdog role in the drafting of these reports, because once they’re released it’s too late to point out their flaws.

And reviving an improved version of the charter amendment for the 1984 games might give the public a better feeling about the games.