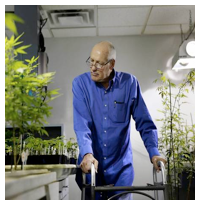 POT FOR PAIN - Since City Councilman Bill Rosendahl made his speech to repeal the citywide ban on medical marijuana storefront dispensaries, two Westside dispensaries came forward to help the politician form a weed regimen as he battles cancer, according to a thorough, first-person interview by the Los Angeles Times.

From using a combination of an edible cannabis butter supplied by Herbalcure, located in West LA, to inhaling out of a vaporizor called a Volcano supplied by The Farmacy, located in Venice, Rosendahl admitted the pain from cancer has subsided considerably from the first months of his diagnosis when he used heavy prescription painkillers, like OxyContin, which kept him incapacitated in bed while only experiencing momentary relief.

Rosendahl has now gone through 13 ‘hits’ of radiation and seven rounds of chemotherapy, and says pot-dispensary laws are for the state and federal governments to sort out, not a city. He also said pot dispensaries should "play by the rules" and pay its taxes as legitimate enterprises.

On Oct. 3, 2012, the Los Angeles City Council voted to repeal its "gentle ban" ordinance aimed at outlawing the sale of medical marijuana in storefronts but preserving the right of cannabis patients to cultivate their own marijuana in collectives of no more than three individuals.

The author of that proposed ordinance justified that LA had not done enough to protect certain neighborhoods facing a proliferation of pot storefronts while allowing access to medical marijuana.

(Matthew Sanderson blogs at Venice.Patch.comwhere this article was first posted.)