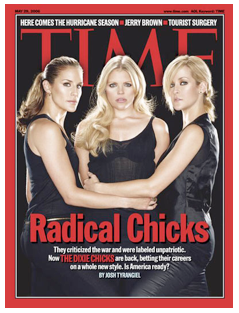 BLOG SOUP - There are a lot of Iraq war anniversaries coming up over the next couple of months, but Greg Mitchell commemorates one that I think was an important object lesson in what our freedom-loving All-American fellows are capable of when they get their blood up:

It was years ago tonight that the Dixie Chicks, extremely popular then and far from controversial, caused a massive stir when singer Natalie Maines declared on stage in London: "Just so you know, we're on the good side with y'all. We do not want this war, this violence, and we're ashamed that the President of the United States is from Texas." It was a little more than a week before their fellow Texas launched a war based on lies.

Of course, hatred was quickly spewed in the Chicks' direction by media types, political figures, and country music yahoos--who never then or now get so excited when right-wing entertainers and media celebs make threats against a Democratic president [...]

I don't even know the Dixie Chicks, but I find it an insult for all the men and women who fought and died in past wars when almost the majority of America jumped down their throats for voicing an opinion. It was like a verbal witch-hunt and lynching.

But President Bush argued: "The Dixie Chicks are free to speak their mind. They can say what they want to say ... they shouldn't have their feelings hurt just because some people don't want to buy their records when they speak out ... Freedom is a two-way street ...."

These women were real heroes in that hideous environment. Not very many entertainers spoke up for them, and most of the one's who did were very tepid in their support. It wasn't the "liberal" entertainment media's finest hour.

And I'm still not ready to make nice:

(Digby is the pseudonym of progressive political blogger Heather Parton from Santa Monica, California who founded the blog Hullabaloo … where this commentary first appeared.)
-cw