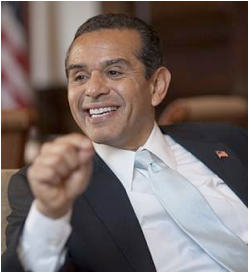 DEATH OF A THOUSAND CUTS - As president of the Los Angeles Neighborhood Council Coalition, one of my jobs is to inform the NC system as to major issues that affect them and their stakeholders.

Today is a tipping point for the NC system and the action the individual Boards take will determine the legacy of the system for future generations.

Last year at the Neighborhood Council Budget Advocate (NCBA) meeting with the Mayor I asked him a very pointed question, “What will your legacy be?” He sat back for a moment and pondered the question replying that his actions in the next year will be his legacy.

The Mayor’s Budget Team’s actions as of Friday have shaped the legacy for the Mayor if we take no action. He will be known as the Mayor that killed participation democracy and caused the death on the NC system by a thousand cuts.

The Mayor’s Budget Team’s has proposed the NC elections be postponed until 2015 and that the NC budgets be reduced 20% to pay for the elections. The reason given by the team is that Proposition A did not pass. Nowhere did I see in the Council minutes, my voter handbook, or Chief Beck’s commercials that the first cuts would be the NC system budgets.

This seems punitive for the NCs for not supporting the proposition and asking the Council to live within their means. This would be like telling Eric and Wendy that they cannot run for Mayor until 2015 and by the way you need to pay for it out of your budget. We would not stand for that so we should not stand for this new proposal.

I need you to take action now. Call the Mayor’s office (213) 978-0600 and tell the Mayor that the NC system needs to have their elections as scheduled because Stakeholders are owed that right to select their Neighborhood Council representatives just like any other elected office in the City.

Secondly, tell the Mayor you want to see the NC budgets restored to $50,000. The cost to run the Councils and the increase in inflation will kill the NC system if funding is not restored.

Remember to call your Councilmember also and send them the same message.

Next, have your NC Council pass the following motion and send the letter to your elected representatives.

Whereas the City is asking the neighborhood councils to postpone their elections due to budget cuts; and

Whereas the city is asking each neighborhood council to pay for their next elections, approx. $ 7300.00 per council; and

That The City fully fund the neighborhood council 2014 elections

That the City restores the $50,000 Neighborhood Councils annual budgets

That the City cease and desist from any further sweeping of neighborhood council funds, in violation of charter section 911

That the XXXXXXX Neighborhood Council, file an immediate letter of complaint against the City for its violations of Charter Section 911.

Thank you in advance for your hard work.

(Terrence Gomes is president of the Los Angeles Neighborhood Council Coalition and can be reached at: terrencegomes@soronc.org)