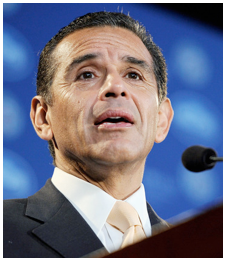 GETTING THERE FROM HERE - After 13 years of fighting for the approval, funding and construction of the Expo Line, it is both infuriating and saddening that the City of Los Angeles—and, in particular, its pro-transit Mayor, would be so lawless and clueless as to promote a breaking of the law that would sour the desire to promote mass transit.

Friends4Expo, the Sierra Club, Metro, the LADOT, Westside electeds and the general public pushed and fought against those unwilling to accept change…but the collective will of the public was decidedly NOT interested in attacking or transforming the Westside for the worst—we all wanted an improvement in our quality of life.

And ditto for the Eastside, Mid-City and Downtown—anywhere we want mass transit to expand, it’s with the goal of improving our Economy, Environment and Quality of Life.

So to Mayor Villaraigosa, who was politically-smart enough while running for Mayor to vote against a Playa Vista because most of the Westside knew it was entirely unmitigated with respect to traffic and infrastructure impacts, I have a few questions:

Why would you prove the opponents of the Expo Line correct, and humiliate and marginalize those fighting for the Expo Line, by completely subjugating the rule of law (City Planning and Transportation Policy, CEQA law)?

Why would you allow Planning, which is controlled by extremists who don’t give a rip about LADOT recommendations, environmental impacts, zoning law and Community Plans, to smash through an approval of a Casden project that will have towers up to 16 stories in a region that only is 2-3 stories high?

Why would you force those of us who fought for the Expo Line, including Sierra Club leader and Friends4Expo founder Darrell Clarke, to be marginalized and bowled over by a power-drunk bully, City Planning Commissioner William Roschen, who did virtually all the talking and made it clear this project was going to pass, come hell or high water?

Why would Planning be allowed to announce its approval of a project less than two weeks before its fait accompli approval by the City Planning Commission, and to be held during the daytime in the Valley over the extreme objections of Westside Councilmen Rosendahl and Koretz?

Why would you say to all the Friends4Expo and Westside transit advocates who screamed about the lack of consideration of this project’s proximity to the 405 freeway, about a complete lack of bicycle, bus and transit amenities and a southern driveway that will smack right across the Expo Bikeway and likely put bicyclists at risk?

What would you say to those of us pro-Expo fighters who dropped everything and drove in horror and terror to the Valley, giving up a day of work and expecting transit-oriented development to be addressed, only to have your representative give a carte blanche approval to Roschen and the Planning Commission and then walk out of the room?

What dare you say to Westside pro-Expo, pro-transit-oriented development and pro-affordable housing Councilmembers Bill Rosendahl and Paul Koretz, whose Planning Deputies testified this project was too large and out of character, but who were also summarily dismissed and disrespected by a power-drunk and downright rude Roschen?

What dare you say to the myriad of Neighborhood Councils and community groups, virtually all pro-transit, pro-transit-oriented development, and pro-jobs creation who voted for Measures R and J, and who collectively screamed, “NO!” to this project after the developer refused to make any mitigations, no matter how much we begged?

What should we say to Culver City and Santa Monica, whose cities are as pro-transit-oriented development, job creation, and truly elegant densification as any reasonable and open-minded municipality, but who would never let a flagrant violation of CEQA law (blatant disregard to airport impacts, woefully inappropriate public notice) stand?

What should we do about planning a future north-south rail line from the Valley to the Westside, which will likely have a key intersecting station at this site, and why was your bullyboy Roschen so insensitive to the understanding that the Casden project has no consideration whatsoever about a Westside Regional Transit Center at this location?

What would you say to Friends4Expo founder Darrell Clarke, and pro-Expo fighters like Barbara Broide, Marty Rubin, Lillian Laskin and others who gave up so much of their time over the past decade to make the Expo Line happen, only to be given one minute to try to correct this “approved, no matter how flawed and rushed” act by Planning?

What would you say about all the bussed-in stooges and contractors, reading off their talking points cards, who were never there during the Expo Line fight and who dismissed us all as “NIMBY’s”?

Really, Mr. Mayor, is that how you treat us—having used us and now discarding us—as no longer relevant?

1) There are health, environmental issues, and lost opportunities for transportation and transit-oriented planning that even the Sierra Club has with this project.  We’d like them addressed, and not by some vague, nebulous “Michael LoGrande and Planning will work on them, but it’s approved.”

2) Will the LADOT and Metro, whom Casden’s developers don’t really talk to and address their recommendations, and will Neighborhood Councils (who really do want a project here) continue to have their ignored suggestions counted as “outreach” by the developers?

3) Do you recognize that the violation of what Roschen (who brusquely IGNORED the advice of legal counsel to continue this item because of raised environmental and legal problems) and the City Planning Commission did last Thursday places the City of Los Angeles in serious legal risk for violation of its City Charter and CEQA law?

The good news, for anyone reading this, is that—despite the $50,000 donated by Mr. Casden to the Mayor’s Proposition A sales tax hike measure effort—the decision of the many zone changes and variances now rests with the City Council, and no way and no how will Bill Rosendahl and Paul Koretz let this Casden monstrosity move forward.

Mr. Mayor, I will propose that the CD11 Transportation Advisory Committee come up with an alternative plan that has residential/commercial/industrial that is transit-oriented, provides jobs, establishes affordable housing, has a Westside Transit Center, considers a future north-south rail line station, and passes muster with the LADOT and the region.

Mr. Mayor, this plan will also require that the Casden developers come up with a mitigation plan to pay back the $25 million that the City of LA coughed up to establish to create a rail bridge over Sepulveda, and which allowed this project to survive at all.

Mr. Mayor, this plan will require this project to have bicycle, bus and transit- and traffic mitigations to please both those living and working here, as well as those wishing to access this station from the Valley, South Bay and the Westside.  There will also be a few ideas as to what to put on the “no-man’s land” adjacent to the freeway.

If the CD11 Transportation Advisory Committee doesn’t wish to pursue this endeavor, I will respect their wishes—but I urge them, the Sierra Club, Friends4Expo Transit, Light Rail for Cheviot, and all interested Neighborhood Councils and community groups to weigh in on what should be a great opportunity to build at this site.

By the way, Mr. Mayor, I am still interested in devising a few ideas as to how to connect MetroRail to LAX…but tire of the endless e-mail back and forth with your staff as to a phone call or meeting that appears to be more lip service than an actual intention to meet and talk.

My last question, Mr. Mayor, is this:  do you think that the reckless power play displayed by Roschen, the Planning Commission and the Department of Planning helped or hurt, the cause of mass transit expansion in LA?

Restated, are you and Planning trying to kill the cause of urban mass transit before it’s even had a chance to truly begin?

(Ken Alpern is a Westside Village Zone Director and Boardmember of the Mar Vista Community Council (MVCC), previously co-chaired its Planning and Outreach Committees, and currently is Co-Chair of its Transportation/Infrastructure Committee. He is co-chair of the CD11 Transportation Advisory Committee and chairs the nonprofit Transit Coalition, and can be reached at Alpern@MarVista.org This email address is being protected from spambots. You need JavaScript enabled to view it. . He also co-chairs the grassroots Friends of the Green Line at www.fogl.us.   The views expressed in this article are solely those of Mr. Alpern.)