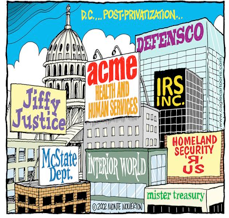 VOICES - The pro-corporate, anti-majority political class is sustaining itself with a lot of self-serving myths these days. Guess you need to do that when you’re dismantling the social contract.

In the closed society that is Insider Washington, rites and mythologies are used to promote the otherwise-indefensible: the cruel irrationality of Austerity Economics.

Dean Baker, for example, points out that Democrats must “prove their manhood” by cutting a treasured and valuable program like Social Security. (Funny: Republicans are never asked to do the same.) This initiatory rite is something like a Mafioso’s “earning his bones” as a “made man” by “whacking” somebody – in this case, his own grandmother.

Here’s another myth: Government must “act more like a business” through spending cuts. Is that really what a smart business person would do? What savvy executive would tell his managers to cut spending by a certain percentage over the next ten years when she or he doesn’t even know what the sales figures will look like?

From investment to “thinking outside the box,” here are six ways Washington’s austerity madness is un-businesslike:

The first error our leaders make is in thinking about government spending in a zero-sum way. In their minds, money goes out and is lost forever. The concept they’re missing is investment.  Business leaders, on the other hand, know all about investment. They know that sometimes you have to spend a dollar to get back two. They reject wasteful spending, but they embrace investment.

Government spending can also be an investment in jobs, especially in times like these. And since money spent on construction projects or education will create more jobs per dollar than money spent on defense, business-like political leaders would promote that kind of spending.

When it comes to borrowing, business executives are rarely in the prized position our government now enjoys: Investors are essentially paying the US government to let them lend it money, because it seems like the safest place to put it these days. If our government was really run like a business, it would be borrowing and investing in future economic growth. The returns would be excellent, and it would even make money on the loans.

Both sides of the negotiating table are offering the “chained CPI” as a technique for cutting Social Security. This would reduce benefits for people who have paid into the Social Security system their entire lives.

Successful businesses don’t cheat their customers like that. It’s a strategy that may lead to short-term gain, but it will pollute the brand so badly that the enterprise will soon go out of business.

Now, most today’s extremist Republicans have essentially joined government in order to destroy it, so this is presumably fine with them. But why would a Democrat like the President insist on proposing these cuts? It pollutes Brand Democrat as well as Brand Government.

The lack of stronger pushback from his own party is equally baffling.  No business executive would stand for it.

350 leading economists have just signed a letter [[http://jobsnotausterity.org/  ]]   saying that “the fragile recovery is threatened by obsessive concern with cutting deficits that has infected both parties.” (Note: The letter was co-created by the Campaign for America’s Future, where I am a Senior Fellow.)  The letter says:

“There is no theory of economics that explains how we can deflate our way to recovery. Businesses are not basing investment decisions on how much Congress cuts the debt in 2023. As Great Britain, Ireland, Spain and Greece have shown, inflicting austerity on a weak economy leads to deeper recession, rising unemployment and increasing misery.

… If you cut spending and consumer purchasing power in an already depressed economy, unemployment rises and revenues fall — and the goal of a smaller deficit keeps receding like a mirage in a desert.”

4.  Smart executives learn from experience – their own, and others’.

Of course, business executives are headstrong people. Expert advice is important, but they want to see things for themselves.  But, as the economists’ letter notes, Europe’s experiment with austerity economics has given us a rich body of experience and the results are clear: Europe’s experience has shown us that austerity economics eventually plunges the economy back into a recession.

And, as even the conservative International Monetary Fund has noted, premature deficit reduction doesn’t even meet its purported goal of reducing deficits. Instead, it increases them.

5. Smart executives encourage ‘out of the box’ thinking.

That business cliché – “think outside the box” – has a lot of merit.  A herd mentality among executives usually leads to disaster for a company, and at times even for an entire industry. (Consider recording industry executives’ blind spot concerning the Internet back in the 1990s.)

Washington’s framing its budget talks within the smallest “box” imaginable: deficits. The President boasts of past cuts even as evidence of their contractionary effects begins to come in. The Republicans press on with their nihilistic attempts to dismantle the government enterprise altogether.

There’s no room at the conference table for smart, enterprising “out of the box” thinkers like Sen. Bernie Sanders or the members of the House Progressive Caucus who have proposed better ways to fix the economy – and reduce the deficit.

A herd mentality is usually the sign that an enterprise has become stale, and is dying from the lack of vibrant leadership – leadership that will insist on bringing new ideas to the table.

Lastly, smart executives charge customers the right amount for the right product. After all, General Motors charges more for a Cadillac Escalade than it does for a Chevy Spark. But hedge managers, who have received great benefit from our government and our economy, pay less in taxes than their personal assistants.  That makes no sense.

What’s more, the ultra-wealthy individuals who received the most from our system often pay the least. General Motors isn’t afraid to charge $1.35 million for Cadillac’s Ciel “concept” convertible, because it’s a very high-end product.  Our government wasn’t afraid to set a top tax rate of 70 percent to 91 percent for ultra-high-earners in the 1950s and 1960s, either – and our economy was much healthier then than it is now.

Why isn’t anybody proposing high-end taxes for the high-end users of our economic system?

We know that Washington insiders – and their corporate sponsors – will keep trying to perpetuate their self-serving mythologies. But let’s stop saying that “government should act more like a business.” They don’t even know what that means.

If they did, we’d all be better off.

(Richard Eskow blogs at OurFuture.org … where this column was first posted.)