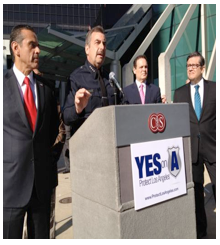 ELECTION 2013 - Proposition A on the March 5th Los Angeles ballot seeks to patch our troubling city budget deficit by increasing the sales tax to the level paid in Santa Monica.

Los Angeles receives little of the amount currently charged as sales tax: only about $0.0075 per dollar spent.  If Proposition A passes, the sales tax will go up by one-half percent to 9.5 percent, and the city will receive $0.005 more per dollar.

The League of Women Voters of Los Angeles urges the passage of Proposition A for several reasons.  For one thing, our City needs a tax increase.  The City of Los Angeles does not have adequate revenue to cover a budget deficit that has left the City in a financial crisis.  Spending cuts alone cannot solve the deficit without further endangering the already-stressed delivery of city services.

We all rely on city services.  We expect the police to come if someone breaks in, and the fire department to show up in case of a fire or medical emergency.  We want to have reasonably well-maintained streets, sidewalks, and street lights.  We expect our City Attorney to prosecute people accused of misdemeanor crimes.  And most Angelinos support having good public libraries and parks.

Over the past few years, our city’s revenues have barely increased while costs per city employee have gone up.  So the primary way city officials have balanced the budget has been by reducing the number of city employees.  The city workforce has been reduced by about 5,000 employees in the last four years.  The result, of course, is reduced city services.  Look around!  Do you think the city looks in good shape?

If we don’t want city services to decline further, the city needs additional revenue.  Proposition A would bring in approximately $200 million per year.  That’s equivalent to the currently projected gap that must be filled to balance next year’s budget.

What would Proposition A mean to you?  If you buy a television for three hundred dollars at a store in Los Angeles, the additional tax would be $1.50, almost certainly not worth the time or cost of going to and from a different city.  And it’s not going to stop your friends from visiting.

Is sales tax an ideal tax?  No, but no tax is perfect.  Sales tax is easy to collect, hard to evade, and is paid by everyone – rich and poor, residents, nonresidents and tourists alike.  Throughout California, the League of Women Voters prefers progressive taxes that vary based on ability to pay.  Yet the League accepts the use of sales tax to raise needed revenue, largely because essential goods and services (like food, rent, and doctors’ services) are sales tax-exempt.

Even with revenue from Proposition A, the City of Los Angeles will still have work to do to achieve long-term budget stability.  Voters should be realistic about the options.

When about 85% of the city’s budget goes to personnel costs, there are two main ways to cut costs: reduce the number of employees or reduce employee compensation.  But the seemingly easy option, letting more employees go, would profoundly harm our city.

Modifying retirement benefits is the most-frequently discussed method of pursuing the other option, reducing employee costs.  Yet retirement benefit reform, which the League strongly supports, is a slow fix because it only affects new employees.

There are other ways of reducing employee costs.  For example, the city has been looking for greater employee contributions to the cost of health coverage.  And freezing or limiting salary growth, particularly in the highest paid positions, would bring immediate savings.

But even with such savings, the city will still need revenue from a measure such as Proposition A to avoid drastic cuts in services.

In its editorial, the Daily News’ main worry is that the half-percent increase would be permanent.  But nothing’s permanent in politics.  A citizen initiative or future City Council could put it on the ballot for repeal if it truly proves to be a burden.

If that doesn’t work, the county would happily charge us four million dollars or more to put the city sales tax question back on the ballot in 2014, or we could wait until our own city elections office runs the next city elections in 2015.

In the here and now, this year, the residents of Los Angeles will all suffer if City services are cut further.  That’s not a positive vision.  Proposition A can provide a step up for Los Angeles.  Vote “yes.”

(David A. Holtzman is President and Elizabeth Ralston Action Chair of the League of Women Voters of Los Angeles.)