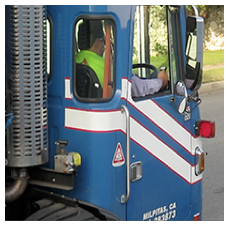 INSIDE INGLEWOOD - Odd behavior by drivers employed by Consolidated Disposal Services (CDS) and driving big blue Republic trucks has prompted a formal complaint alleging picture-taking of private property not in public view and other acts that resemble monitoring and possible harassment.

In the days and weeks following the politically motivated break-in of the Morningside Park Chronicle publisher Teka-Lark Fleming's house, the company's trash trucks have been parked outside Fleming's house. One driver was observed apparently taking pictures of the walled-in property. Other drivers have been recorded making multiple visits to ostensibly service the publisher's trash containers within very short times on the same day.

(Full disclosure: this writer is married to the publisher and is the paper's editor-in-chief.)

After the first incident, whereby a driver was observed aiming a cell phone or other possible recording  or monitoring device over a nearly seven-foot cinder-block wall and into Fleming's yard, Republic General Manager Jay Fowler stated that he had "specifically…instructed [Republic] drivers not to take their breaks in your neighborhood." That driver, upon realizing he was being observed and filmed, exited the truck's right side overlooking the wall, and entered the truck from the left side and quickly drove away.

Despite Fowler's promise, the parking activity was repeated over the following weeks—all by the same driver in the same truck. The truck's number and pictures of the driver had been sent to Fowler with the initial complaint. Fowler refused to divulge the driver's name.

After two more complaints were formally submitted to Fowler regarding the same truck going around the block multiple times within several minutes, and each time stopping at her house to service an obviously empty container, Republic appeared to retain an attorney to handle the matter.

Nevertheless, the bizarre behavior has continued, and many incidents continue to be filmed.

It was during this reporter's personal investigation regarding why such behavior might be occurring that Inglewood Mayor James T. Butts' brother's employment at CDS was discovered. Michael Butts is Supervisor of Dispatch at CDS. The company recently was awarded an exclusive city contract.

Michael Butts was apparently hired by CDS as a Supervisor in December 2012. During one conversation with Jay Fowler, it was confirmed that Butts is the Supervisor of Dispatch. The position is responsible for directing drivers as they perform disposal services.

Mayor Butts has been critical of the Morningside Park Chronicle's stories. Using the official "news"paper of the city, Inglewood Today the mayor has sought retribution for the stories exposing corruption and duplicity under in his administration. In the midst of the stories published in Inglewood Today, the publisher's house was broken into and the newspaper's tax and finical records were rifled.

One of the key topics in the stories published by the city's official newspaper has focused on the Chronicle's finances.

The mayor possesses an official Secret status with the FBI was handed him prior to his being named the Deputy Executive of Security at LAX.

The matter could be serious. Two investigators visited Athens Services' CEO, Gary Clifford, in late 2012. Clifford, reached by telephone in  did not name the investigators but confirmed that they were from the D.A.'s office.

Athens was one of the companies not selected despite having what many residents and city officials believe was a superior bid.

Fowler was hired by CDS in August of 2012. He was previously employed by Athens for several years as General Manager.

The city of Inglewood awarded the contract to CDS in mid-2012 and CDS commenced service on August 1 of the same year.

When told that Michael Butts was the Supervisor of Dispatch at CDS, Clifford seemed to express mild amusement. "So he actually works there now, hm?" remarked Clifford. When asked to clarify, Clifford instead stated he would call back once at the office. The call never came.

Calls and e-mails thereafter were not returned.