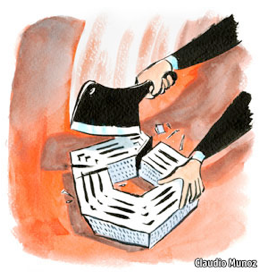 Dear Digby - One of the nice things about being a Member of Congress is that I have security clearance, and you don't. (Sorry!) So I know about the threat that the looming sequester poses to a crucial top-secret military research project. Since we're friends, I'll tell you about it.

The US Army has discovered that a small round white object, when hurled from close range at the upper extremities of an enemy combatant, can have a devastating impact, sometimes inducing unconsciousness. Deploying this weapon often results in immediate disorientation in the enemy combatant, reflected in his abrupt non-vertical motion and transient imbalance. The Army refers to these powerful weapons as "Ballistic White Spherical Objects," or BWSOs.

Although it packs quite a wallop, the BWSO is surprisingly compact. It measures only nine inches in circumference, small enough for a properly trained US soldier to hold one in each hand. A fully-functional BWSO weighs only five ounces, making it practical for a US soldier deployed on the battlefield to carry several of them, simultaneously, in his kit.

Remarkably, US military experiments have demonstrated that the BWSO is completely resistant to electromagnetic pulses (EMPs), and other advanced electronic countermeasures. In the wake of an EMP caused by a nuclear blast, BWSOs evidently will continue to function in the prescribed manner, unless they are vaporized.

Recognizing the obvious wartime threat, Pentagon military planners have considered the scenario in which the Chinese Navy blocks both the Pacific and the Caribbean sea lanes. The planners have assured the Joint Chiefs of Staff that we will nevertheless be able to maintain our supply of BWSOs because, since Costa Rica has no military, we can just take whatever we want. (A nation without a military - imagine that. But I digress.)

BWSOs are white objects, as the acronym implies. The Defense Advanced Research Projects Agency (DARPA) is, however, in the midst of a year-long study at a secret location to determine whether BWSOs remain effective when they are red, green, blue or even purple. If these tests prove successful, then next year, DARPA will test striped BWSOs, and in the following year, plaid.

Every BWSO features 216 pieces of red thread, or "stitches" (not to be confused with the medical treatment for combat wounds).  These "stitches" sometimes cause a completely unexpected feature upon deployment - a curvature in the arc of the BWSO's trajectory. At first this was believed to be an optical illusion, or perhaps a gravitational lensing effect, in accordance with general relativity.

However, detailed telescopic studies performed by orbiting military satellites, in both the visible light and infrared parts of the electromagnetic spectrum, have confirmed that this effect is genuine.

Properly trained, a soldier can deploy the BWSO with mind-boggling speeds approaching 100 mph, or almost twice the velocity of a car on an interstate highway adhering to the national speed limit (if such a thing can be imagined). Interestingly, this is true of both English-speaking and Spanish-speaking drivers, and both automatic transmissions and "stick shifts." At such velocity, scientific studies at Guantanamo Bay and certain "black ops" CIA locations have demonstrated that the impact of a BWSO upon the skull of an enemy combatant is devastating, especially when the enemy combatant is in chains.

Because BWSOs are usually non-lethal, they are also being studied for usage by internal security forces. One advanced concept is to deploy them from domestic drones. In the United Kingdom, tests are being conducted to see whether they can be integrated into the existing complement of equipment used by English "bobbies," whereby one "pitches" and the other one "hits."

The US Army's current BWSO research program - placed directly at risk by the sequester -- focuses on the maximum speed with which BWSOs may be deployed.  In this key project, the Army has identified and procured the services of certain experts in the field. These experts cannot be identified, for obvious reasons, but they definitely are not named "CC Sabathia," "Johan Santana" or "Barry Zito." (Disturbingly, intelligence reports conclusively demonstrate that "Justin Verlander" may or may not be cooperating with foreign military forces in a similar manner, thus posing the very real threat of an "arms race.")

Due to earlier budget cuts, the Army found that it could not pay the normal daily rate for these experts, which is $600,000 for approximately two hours of work. The Army found, however, that it could procure these services for half-price, or only $300,000 for each two-hour "start," if it conducted these tests between mid-October and late March.

These essential tests are being threatened by the sequester. If the sequester goes into effect at the end of this month, then we may never understand why Army test data indicate that Santana's deployment of the BWSOs appears to be slowing. (Could it be a gradual increase in the strength of the Earth's gravitational field?)  Or why Zito's declining ability to force the BWSO trajectory to arc occasionally seems to leave the BWSO hanging in the air, much like a ripe pumpkin.

We cannot leave America defenseless. We cannot let the terrorists win. Remember, they hate us because we are free. But the cost of that freedom is precisely whatever the current military budget happens to be, before any terrorist-coddling sequester cuts.

Virtually all of the media coverage of the impact of the sequester on the US military-industrial complex has focused on the loss of jobs, as if hiring people to kill other people is some kind of national full-employment program. But having read all the way down to here, at least you, Dear Reader, you understand that there is a lot more at stake.

Oh, and we're also cutting the air traffic control budget by nine percent. That should have some interesting consequences.

P.S. Please sign our petition against Social Security and Medicare cuts at www.no-cuts.com, if you haven't already.