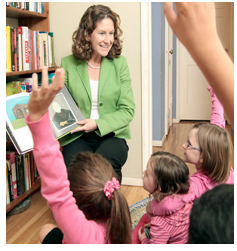 EDUCATION POLITICS - You don’t have to read CityWatch to know that California is increasingly difficult and less affordable for families with children to survive and thrive.

Many politicians claim to represent children, but usually represent union or corporate interests who only prioritize children as an afterthought, if at all.

Fortunately, Kate Anderson is running for the LAUSD School Board, and we can finally have someone who prioritizes children FIRST, both in the Westside, the West San Fernando Valley and throughout the District.

I know this because I’ve also had the first-hand experience of working for years with Anderson.

There’s a reason why the LA Times is supporting Kate Anderson, and not her opponent Steve Zimmer who, as the Times notes, “has fallen short in the execution of his goals, with proposals that smacked of trying to please union bosses.”

That reason is pretty obvious:  We need education advocates who really care about students and their families and teachers, and not about those education unions with big political budgets and small hearts.

As with police and firefighters and other public sector workers, we LOVE teachers and educators—but we can only support those who do so because THEY want to work for US…and not the other way around.

Those who view Riordan’s past and Bloomberg’s current donations with scorn should consider that Bill Maher, whether you agree with his political views or not, put his fiscal neck on the chopping block when he donated $1 million for President Obama’s re-election effort—Maher did it because he felt he was doing the right thing…and Riordan and Bloomberg are doing no less.

Cleanup of our educational mess has thrown courageous Democrats against one of their leading fiscal and political constituents—teachers and other education unions—because they felt they were doing the right thing.

Lifelong Democrats Michelle Rhee, Antonio Villaraigosa and Barack Obama have had some tough words and actions against misbehaving teachers/education unions, and continue to do so because it was and is the right thing to do.

(It’s a shame we didn’t and don’t see a similar courageous effort by the GOP against misbehaving Wall Street and corporate interests and cultures!)

The upcoming March elections has reformist candidates such as Kate Anderson, Monica Garcia and Monica Ratliff pitted against a slate of potential union stooges who want nothing more than to defeat and remove the tough new reformer LAUSD Superintendent John Deasy.

For some unfathomable reason, UTLA union leaders still are fighting Deasy and the reformists on teachers’ evaluations being substantially predicated on test scores.

Deasy, Anderson and other reformists want to empower students and their families, and that apparently scares the UTLA which, like other teacher/education unions, also still even opposes procedures to expeditiously remove teachers that are proven child predators.

I support Deasy, and I support Anderson … in large part, because I’ve had the first-hand experience as a Mar Vista Community Council Boardmember for the better part of a decade.  Although I was and am primarily devoted to Transportation and Planning issues, I’ve never forgotten that Neighborhood Councils usually don’t get around to the needs of children and their education.

Hence I was an enthusiastic supporter of expanding the funding and promotion of motions from the MVCC Education/Arts Committee, which Kate Anderson has successfully chaired for years.  I have first-hand experience of working with Kate as a fellow MVCC Boardmember, and I do not doubt her enthusiasm for, and her connection to, the neighborhoods and families of Los Angeles.

Kate Anderson is a true children’s advocate we can vote for, because she is an attorney with political experience who actually has small children and a family, who’s active in her neighborhood, and (like myself) is hardly anti-union but knows that children and education must come FIRST.

The UTLA is hardly the only misbehaving public sector union victimizing families in Los Angeles, and who believe WE must serve THEM—the IBEW union that has made the DWP and our utility rates far too expensive for far too little service, as Steve Lopez has recently noted.

But families need to live, and their children need education and parks and open space, as they grow and become future productive citizens to support and strengthen our City’s communities.  And these communities all have voters who want and deserve better lives.

It’s time for the voters, and for the families, and for the children’s advocates, of Los Angeles to have the final say in the upcoming elections on March 5th.

There are failed School Boardmembers, such as Zimmer, and there are new reformers with families and established ties to their communities, such as Anderson—we must replace those who disappointed us when they had their chance with those who can offer us a fresh new start.

Zimmer is, unfortunately, a disappointment while Anderson, fortunately, can help give us that precious new start.  Vote for your children, vote for our families, and vote for first-rate public education.

Vote for Kate Anderson for District 4 of the LAUSD School Board.

(Ken Alpern is a Westside Village Zone Director and Boardmember of the Mar Vista Community Council (MVCC), previously co-chaired its Planning and Outreach Committees, and currently is Co-Chair of its MVCC Transportation/Infrastructure Committee. He is co-chair of the CD11 Transportation Advisory Committee and chairs the nonprofit Transit Coalition, and can be reached at Alpern@MarVista.org This email address is being protected from spambots. You need JavaScript enabled to view it. He also co-chairs the grassroots Friends of the Green Line at www.fogl.us.   The views expressed in this article are solely those of Mr. Alpern.)