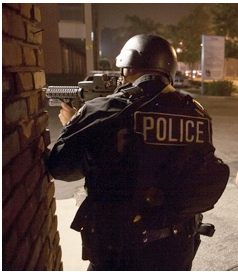 CERDAFIED - The manhunt for Christopher Jordan Dorner will no doubt end as tragically as it started.

It leaves Los Angeleno’s asking some hard questions. Dorner’s manifesto, entitled “Last Resort” revealed the exhausted frustrations of the ex-LAPD officer who fought to clear his name and hold other officers accountable through all the channels available to him.

He alleges that, “The department has not changed since the Rampart and Rodney King days. It has gotten worse. The consent decree should never have been lifted.”  No doubt this allegation can be swept under the rug as the mad rantings of a lunatic, but should they be?

Should this tragedy be compounded by the resistance to change? LAPD has new opportunities to address the grievances internally. Not because one of their own went rogue, but because these allegations have been made over and over, in suit after suit, by other officers.

If Dorner is right, are we retaining the abusive officers and promoting them while alienating officers who seek to serve and not abuse the public interest? He states, “Terminating officers because they expose a culture of lying, racism (from the academy), and excessive use of force will immediately change. PSB can not police their own and that has been proven. The blue line will forever be severed and a cultural change will be implanted. You have awoken a sleeping giant.”

● See also: “Dorner A Drone Target on US Soil” Solon.com

It would be too easy to just commiserate with LAPD and the victims and their families. It requires no action, just compassion. We must certainly start from compassion … and move to action. Not because Dorner states, “I am here to change and make policy. The culture of LAPD versus the community and honest/good officers needs to and will change. I am here to correct and calibrate your morale compasses to true north.” But because every tragedy has a lesson and sometimes a blessing can be found in the ruins of our lives.

Five years ago, I lost my brother in law, to suicide. Unbeknownst to our tightly knit family, he was battling depression after losing several homes to foreclosures, breaking up with a girlfriend, and recovering from a drug addiction no one knew about. No one saw it coming. Richard was strong, intelligent and appeared to be resilient. He had weathered two divorces, and had rebuilt his life with a renewed vigor. That was apparently a facade.

Any loss is tragic, but by suicide … this was unfathomable. We searched for answers, reasons, signs we missed along the way. Eventually we had to take stock. Recognize that something needed to change in the family dynamics.  The old path had failed us. Richard hadn’t turned to his family during his crisis. He kept it painfully secret. Our only take away from this tragedy was to take a hard look at ourselves. That was where we found the blessings.

Our path had turned unexpectedly and all the family dynamics that seemed set for eternity now evaporated in the wind. Hard lines softened. Fixed ideologies became more flexible. Though we always shared a daily chat, the subject matter was more open, and less judgmental. We found that a close family could become closer. That was Richard’s final gift to us. The unmovable mountain had shifted from view.

Because of this devastating experience, perhaps I see Christopher Jordan Dorner differently than most. I see a man unable to accept absolute blatant injustice.

Consider this perspective: Dorner was someone who expected to challenge that status quo and win. He was disillusioned and found himself in a world he no longer could tolerate. In a desperate attempt to make sense of his life, he erred in believing that the end can justify the means. This was no different than the ‘corrupt’ police officer’s philosophy. The playing field was now even. He had succumbed to the same vile nature.

This does not get LAPD off the hook. They have been taken to task, and placed under a microscope. They will try to spin events, but I hope they will do some soul searching and change as a family. Don’t allow widows to bury their husbands without the blessings that can come from changes amongst the rank and file.

LAPD has not handled this crisis well, with innocent victims stacking up due to the negligent over reaction. Dorner has inadvertently highlighted another glaring flaw in their training program. How two women, in a different color truck, delivering newspapers, could be confused with Dorner, and fired upon, is beyond comprehension.

Dorner’s family does not deserve the legacy he has left them. They need our support and prayers equally. They too must find blessings in the ruins of this unfolding tragedy, though they may seem too far out of reach at this moment, they will come through the abyss in due time.