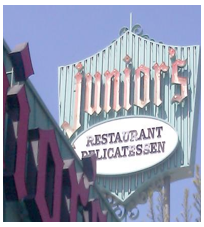 Transplanted New Yorkers in the 1980’s and 1990's not only found housing prices relatively cheap on arrival here, they especially found culture comfort on arrival in a deli like Junior’s on the Westside, or for a special occasion in a highbrow, world-class restaurant like Campanile.  And those New Yorkers who migrated to the Valley but remained novices to LA's noted street scene cuisine could grab a taco at Henry’s Tacos as they learned their way around LA’s culinary exotica.

All three restaurants have shuttered in the past three months, after astonishing long runs.

Juniors lost its lease after 52 years, and Henry’s Tacos after 51.  The landlord of the latter hurriedly yanked off the googie signage after closing, lest the community get further ideas about trying to make the place a landmark, which they tried when the lease problems began last year, to no success.

Campanile, the youngster in the group at 23, nonetheless had a more profound impact on LA’s haut cuisine scene than perhaps any other restaurant from the 1980s.

To no small degree, ex-New Yorkers helped make all three flourish. But now that syndicates and developers are getting excited about LA's commercial real estate prices, these lifelong haunts have closed, unable to compete with the desire for the shiny, new and newfangled.

While reading closet-case Ed Koch elegies these past few days has been a fairly nauseating pursuit for those who lost loved ones to AIDS in NYC in the eighties, it has been more pleasurable to talk to old New Yorkers who fled NYC to LA in the '80's about Koch's Gotham and why they left, and whether or not they think it was a good move.

Most do, despite the many hiccups—although they have increasing concerns about their adopted city.

The real estate-fueled bonfire of vanities that NY experienced in the decade—or maybe to which Koch capitulated in the decade—also held up in LA until 1989.  But then the boom was severely checked here, first by recession and then by riot and then by earthquake. Conversely, the real estate boom continued in New York fairly uninterrupted until 9-11, and then quickly got back to business under its billionaire realtor-driven Mayor Bloomberg.

Some New Yorkers found LA prices cheap not only for the 1980's but especially through most of the 1990's. They wouldn't have found it so in NYC in the ‘90’s, after Dinkins turned his sites on the one part of town Koch couldn’t fix: Times Square. Transplanted New Yorkers had time and a hardnosed work ethic, hard-nosed enough to build lives on the cheap LA, and most stayed forever.

In LA, in fact, we are now told we have a city that more resembles a city like Tijuana than like other American cities for wealth distribution.

“The Gini coefficient of the LA metropolitan area, the standard measure of income inequality, is now .485, among the worst scores for America's big cities,” Global Post correspondent Kevin Douglas Grant, a former USC Annenberg fellow, noted last week in a column that was widely reprinted in Southern California newspapers, but not in LA newspapers.

The Gini coefficient is a 100-year-old measure of income inequality that has proven an effective measurement tool despite its sinister pedigree—it was developed by a renowned Italian statistician named Corrando Gini, who later became a fascist.  The man has been discredited, but this statistical formula hasn’t; it has rather been refined across the decades.  A higher Gini coefficient number indicates less equality.

Mexico’s overall Gini coefficient is .480—a better score than LA’s in terms of income equality.

Certainly, a lot of interesting stuff happens in Tijuana, especially at street level, but also among its wealthiest. And in New York, like San Diego's balmy retirement ‘burbs, the city is "interesting" for an ever-shrinking group of well-heeled and pensioners and their heirs, an ever more privileged class, able to pay stratospheric rents while, if they dream of home ownership, they now dream of it in another place.

For the less privileged, NYC is simply a pulp mill that flattens everyone.  Which is increasingly an LA story as well.

So what is killing the great restaurants of LA in 2013? Income inequality and out of reach rents--the same things that drove so many New Yorkers out of their home town in the 1980s and 1990's.

Some of LA’s longest-standing, most beloved eateries are facing a flattening too, in this new, more highly polarized economic climate, where there are $1 street tacos for the masses, $9 tacos at restaurants within two blocks of Skid Row—and where world-class Campanile, middlebrow Junior's, and street sharp Henry's Tacos all can’t pay the rent anymore.