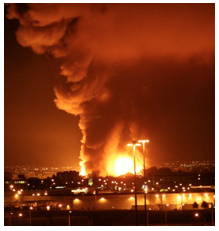 VOICES - New Jersey Congressman Florio famously said, “From the right to know will flow the right to demand, and get, tougher laws and safer practices.”

As his quote indicates, our two major national Right to Know laws enacted in the post-Bhopal toxic gas disaster period, 1986-1990, aimed to empower citizens with the ultrahazardous chemical release risk information that can inform citizens of their exposure to potential fire, explosion or toxic gas cloud risks.

Congress hoped the newly informed citizens and media would then create the necessary pressure to reduce major chemical disaster risks.

Retired US Coast Guardsman Stephen Flynn reminded:  “Like the coastlines of the Middle East, the US waterfront is littered with attractive targets.  Refineries, power plants and chemical factories are ready-made weapons of mass destruction, located in some of the most densely populated areas… The waterside is too often an open flank.” Flynn message suggests why we feel a significant and re-energized sense of urgency for risk reductions in our San Pedro Bay port communities.

Los Angeles Harbor area residents have been concerned for many years about the chemical release risks in their community, particularly those posed by the giant LPG storage tanks (specifically, butane and propane), which Plains All American Pipeline now operates under the name Rancho LPG LLC.

The facility’s huge tanks loom over homes, schools and businesses, with enormous storage volumes on site of butane and propane  which railcars and trucks transport through neighborhoods and the Port of LA., bringing the disaster risks within a few feet of thousands of homes and businesses.

And now the City is willing to put even more thousands of unsuspecting citizens at risk without notice.  The very latest demonstration of political recklessness relating to public safety is LA City’s compliance in a plan to develop the Ponte Vista housing project which will bring an additional 800-1,000 homes within  ¾ of a mile of Rancho LPG.

According to the EPA’s own calculation method, Rancho LPG has a potential blast radius from a single tank of 3 miles.  While the probability of a high consequence accidental release disaster is low, a well-planned terrorist attack on a storage tank or on a string of railcars could provide the terrorists their desired sensational media event.

The post-9/11 terrorism context in which two US wars and other military interventions has made the US a major focus of the ire of radical Jihadists worldwide.  We badly need a thorough re-evaluation of locations and operations of major chemical storage tanks and the movement of hazardous cargoes in our densely populated local area, in perhaps the most important energy port in the US if not the world (thus a valuable target).

The latest Algiers natural gas plant takeover highlights the premiere opportunity that energy facilities offer in the way of terrorism.  In particular, informed LA Harbor Area residents are deeply worried about the accidental release and terrorism risks posed by the Rancho Liquid Petroleum Gas storage facility currently operating adjacent to the inner harbor of the Port of LA.

Any notion that a public discussion of chemical accident or terrorism vulnerabilities in San Pedro Bay ports will be “teaching potential terrorists what to attack” is phony.

The basic information on the major chemical release vulnerabilities are clear enough to any informed observer or internet user, and even suggested by the NFPA hazard diamonds clearly visible on all the tanks.

[We could agree to refrain from public discussion of a very few operational details, as the US Coast Guard and the US Chemical Safety and Hazard Investigation Board did in the recent accidental toxic gas release case involving the Bayer Crop Science Methyl Isocyanate storage tanks in Charleston WV.] Absent a vigorous public discussion, it is only the public that is being largely kept in the dark.

Over the past several years, residents of the Harbor area have meticulously analyzed any and all public information made available through the Community Right to Know  and the Freedom of Information Acts on Rancho’s 40 year old facility.  The stunning risk information highlights the failed oversight by government at all levels to properly safeguard citizens from the extraordinary risk exposure of Rancho LPG.

Initiated in 1972-73 without benefit of any risk analysis, the LPG facility (Petrolane) located in the Harbor for the extremely profitable venture of shipping by sea.  A single ship can transport 7 million gallons of this hazardous commodity as compared to far lower truck and rail car capacities varying between 9,000 and 30,000 gallons per carload.

LA Harbor Commissioner Cho was a shareholder in the company at the time this facility was installed. The facility was expedited through the permitting process allowing the tanks to be located in the actual rupture zone of the Palos Verdes Fault (mag. 7.3) on LA City acknowledged “liquefaction and landslide areas”, and in a “methane zone”.

In 2004, the Port of LA refused to renew the LPG Company’s lease on the shipping wharf servicing the facility since their underground pipeline for the gas transfer from the LPG facility would have eliminated the port’s ability to expand the China Shipping terminal.   The existence of the pipeline was determined to pose too much of a hazard to the new terminal operations. Yet the storage facility’s cargoes still fan out through the metropolitan area daily.

The LA City Council has long publicly acknowledged the extraordinary risks that the facility and hazardous transportation pose to existing residents.  In 2005 and again in 2007, the LA City Council introduced motions urging that the LPG storage tanks be “relocated”.

Even the new Canadian owners of the Rancho facility in their first public meeting with concerned citizens in 2008, publicly admitted that the helter-skelter siting of the major chemical facilities throughout the LA metropolitan area provided unnecessary disaster risks to the population, and that a sensible site for their own storage facility would be located outside a densely-populated area.

More Americans these days seem to favor protective, vigorous and technically informed government at all levels which bolsters productivity and employment while deploying informed oversight and eliminating unnecessary serious risks.  A weak government and an uninformed public provide a recipe for possible disaster.

There is a profound phrase in the movie “Zero Dark Thirty” when the CIA is considering the uncertainty and risk involved in a Bin Laden raid. “How do you estimate the risk of doing nothing.” Certainly, in the case of Rancho LPG…..we have been doing “nothing” for too long.

(Dr. Fred Millar is a consultant on prevention of chemical accidents and terrorism risks, based in the Washington DC area.  He initiated the second of the National Right to Know laws in 1990 and assists citizens and public officials to assess and prevent chemical risks.  Janet Gunter is a community activists and member of the San Pedro Peninsula Homeowners United Inc.  The SPPHU was one of the litigants in the successful China Shipping lawsuit that was represented by the NRDC in 2001-2003 on the issue of air pollution and aesthetics. Get more info: hazardsbegone.com)
-cw