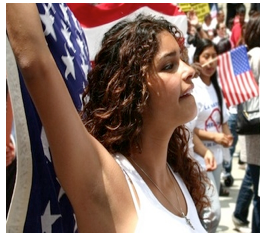 VOICES FROM THE SQUARE - A year ago, Republican presidential contenders were debating whether or not to deport undocumented grandmas. A year and an election later, many Republican leaders appear willing not only to keep her in the country, but to make grandma a citizen while they’re at it.

We’ve seen this movie before, or at least something very similar. A president in his second term decides to prioritize long-overdue comprehensive immigration reform (which means taking on all aspects of the subject, as opposed to cherry-picking high-tech visas or agricultural visas or the plight of undocumented students), and earnest-sounding bipartisan senators line up to work on a bill.

Some of the same legislators were back before the microphone last week—Chuck Schumer, Lindsey Graham, Dick Durbin, and John McCain (returning from a 2010 gig playing an anti-immigration zealot).

There were a similar set of principles and sense of urgency and momentum around immigration reform in 2006, and not just in Washington. The marches in downtown Los Angeles that year were inspiring, or scary, depending on which side of the issue you were on.

And yet nothing happened back then. For all their amassed political firepower, President George W. Bush, an array of bipartisan legislative leaders, big business, most organized labor, the civil rights community, and Latino groups couldn’t accomplish immigration reform.

The grassroots nativist pushback from the right made the very word “comprehensive” unseemly in Washington.

The conventional post-mortem of that failed effort (the polite one that doesn’t focus on the racist aspect of much of the opposition) was that the American people weren’t ready to consider legalizing millions of undocumented workers in this country unless the border was first secured.

There are four causes cited for the decline in crossings, and no shortage of arguments over their relative importance: the economic slowdown on this side of the border; the fact that things are going relatively well in Mexico; demographic changes as Mexico’s population ages; and tougher border security.

So when it comes to a secure border, politicians should unfurl the “Mission Accomplished” banner (it must be stored somewhere), declare victory, and move on. The federal government is already spending close to $20 billion annually on border security, and it has implemented or exceeded all the benchmarks proposed to define a secured border back in 2006 and 2007.

Unfortunately, many Republicans have been trading on fears of an unsecure border for too long to align their rhetoric with reality. And so, while the most remarkable development in recent months was the willingness of the Republican senators involved to embrace the idea that the 11 million undocumented immigrants already here should be entitled to citizenship down the road, these Republicans want this road to be a long and windy one.

Specifically, the bipartisan blueprint offered up last week wouldn’t make the undocumented workers now in this country eligible for citizenship until an independent commission certifies that the border has been sealed.

Asking these millions of people to pass civic tests and pay fines to regularize their status makes sense. But it’s absurd to force them to remain in legal limbo for as long as it takes us to fix (or pretend to have fixed) problems not of their making.

Beyond issues of border security, it is not the immigrants’ fault that we hire them without offering them proper identification and rights enjoyed by other US residents—it is our fault. We conspire in encouraging them to come without offering a legal avenue, hiring them, relying on their labor, and often paying them less (even when not outright exploiting them) than they would otherwise make in an aboveboard situation. Extending that status quo only extends our culpability—not theirs.

In Washington, other factors suggest 2013 may play out differently than 2006. First, everyone in the capital, down to the cab drivers and meter maids, can tell you that Mitt Romney only won 27 percent of the Latino vote nationwide, and that this sizable voting bloc is growing exponentially.

Second, the opportunity cost of bashing immigrants has gone up in a soft economy. Legalizing the status of undocumented workers would be a boon for home sellers and builders in large swaths of the country and would bring more tax revenue into state and local coffers.

Third, in the aftermath of their loss of the White House, Republicans are fighting many more losing battles across a range of economic and social policy fronts than they were in 2006. Immigration reform is losing its appeal as the issue on which to bet the Grand Old Party’s future.

If there are reasons for optimism, there is still reason to fear another disappointment for immigrants. For one thing, even political leaders eager to push for reform don’t always offer a compelling narrative about the people whose lives we’re seeking to improve.

And that’s because we are too squeamish to talk honestly about all the ways in which they—millions of undocumented office cleaners, construction workers, restaurant workers, gardeners, valet parkers, nannies—have improved our lives.

President Obama, while unveiling his proposal in Las Vegas last week, felt compelled to introduce the subject of immigrants by heralding those who helped start businesses like Google and Yahoo, creating “entire new industries that, in turn, created new jobs and new prosperity for our citizens.”

The president went on to note that one in four high-tech startups in America was founded by immigrants and that immigrants account for one in four new small-business owners.

All this, and more, is true. But talking about immigrants as job creators as the prelude to a pitch for comprehensive reform comes across as both apologetic and disingenuous. The millions of undocumented workers living in the shadows are not wealthy job creators, and we have to become comfortable with talking about why we employ them.

The politics seem easier when addressing a concrete slice of the immigration pie—those high-skilled computer programmers, or the seasonal agricultural workers, or students brought by parents at a young age but now facing exclusion from college.

We have a harder time when talking about the greater mass of unskilled workers, those huddled masses, entering our economy. Their contributions to our overall standard of living are well understood by economists (and noticed by Angelenos going about their daily lives).

But politicians still have a hard time telling their story, and making the case for unskilled immigrants.

It’s one reason we got into this mess in the first place. Even after an amnesty was granted to undocumented workers in 1986, little effort was made to expand the supply of permanent visas for unskilled workers.

As my colleague Tamar Jacoby, president of ImmigrationWorks USA, and others have pointed out, the millions of undocumented workers at issue now didn’t skip some tidy line, as opponents of reform like to argue. No such line exists.

As the current reform effort advances, no one should pretend (as the president runs the risk of pretending) that the millions of undocumented workers here are a one-time phenomenon, the legacy of an inexplicable tidal wave. Their status must be regularized, to be sure, but it is equally important that the country have an honest debate about the types and numbers of immigrants we need to absorb in future years, and create a legal means for them to come.

Otherwise, we will be seeing some version of this movie again in the not-too-distant future.

(Andrés Martinez is editorial director of Zócalo Public Square and vice president of the New America Foundation. Zocalo Public Square … where this article was first posted … is a living magazine that connects people to ideas and each other. A must visit.)