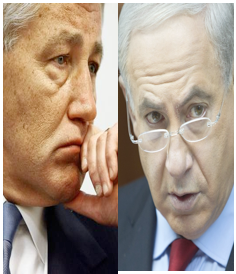 WHAT’S BEHIND THE HAGEL PUSHBACK? - On January 23, 2013, The Jerusalem Post reported on a meeting held by Chuck Hagel, President Barak Obama’s defense secretary nominee, in which Hagel stated his strong commitment to preventing Iran from acquiring a nuclear weapon and to maintaining Israel’s qualitative military edge. In addition, Hagel’s office stated, “Hagel appreciated the opportunity to have a constructive, informed and wide-ranging discussion.” What is wrong with this picture?

At the meeting were present US Vice President Joe Biden, and leaders of the Anti-Defamation League, the American Jewish Committee and the American Israel Public Affairs Committee (AIPAC).

This meeting followed a previous one held by Hagel with top Jewish Democrats in which he apologized for a 2006 comment in which he described the “Jewish lobby” as intimidating”. During the meeting, he reassured them that despite his past critical stance on war with Iran to prevent it from obtaining a nuclear weapon, he was now on board with President Obama’s stand on this issue.

And the inevitable question is why does a nominee for defense secretary of an independent country have to explain his intentions to anybody, least of all to people who advocate an aggressive policy against another independent country? And why does the United States Vice President have to be present to give additional authority to his statements?

And the obvious answer seems to be that these organizations, widely known as the pro-Israel lobby, are the ones that through their influence could derail Hagel’s confirmation as secretary of defense.

What is the meaning of all of this? Let me bring the voice of Uri Avnery, one of the most honest, lucid and courageous observers of the US and Israel political scene, a former member of the Knesset and a staunch peace activist.

“Americans must be race of angels,” he writes, “how else to explain the incredible patience with which they suffer the fact that in a vital sphere of US interests, American foreign policy is dictated by a foreign country? For five decades, at least, US Middle East policy has been decided in Jerusalem. Almost all American officials dealing with this area are, well, Jewish. The Hebrew-speaking American ambassador in Tel Aviv could easily be the Israeli ambassador in Washington. Sometimes I wonder if in meetings of American and Israeli diplomats, they don’t sometimes drop into Yiddish.”

If anyone doubts the accuracy of Avnery’s characterization, it would be a good memory exercise to remember Netanyahu’s last address to the US congress, where practically all senators and congressmen wildly applauded Netanyahu’s every single sentence, while at the same time jumping up and down like children at a “piñata” party. Is this the behavior one should expect from representatives of an independent country? Why are they so subservient to the interests of a foreign country?

Lawrence Davidson, a professor of history at West Chester University in West Chester, Pennsylvania, offers an explanation through a process that he calls “lobbification.” According to him, at some point in time every single Congressman or Senator has been approached by a lobbyist—in the case of the Middle East, by one representing AIPAC.

The lobbyist offers the representatives financial campaign assistance, good media coverage, briefings on the Middle East and even trips to Israel. All that he is asked in return is that they consistently vote in a pro-Israel way. Should they refuse this offer the lobbyist group will probably support the opponent party, making sure that those who refuse the offer are defeated in the next election.

As a result, Davidson points out, “…the national interest is replaced by the parochial interests of lobbies that are successful at suborning Congress and the White House-Zionists pushing support for a racist and expansionist foreign power, Cuban-Americans carrying on a 53 year old vendetta against the government in Havana, the NRA striving to protect the right of every American to own a submachine gun, and the like.”

Is this the kind of foreign policy we want our country to have? Is this how we want our democracy to work?

(César Chelala, MD, PhD, is a co-winner of an Overseas Press Club of America award. He is also the foreign correspondent for Middle East Times International. This column was posted first at CommonDreams.org.)