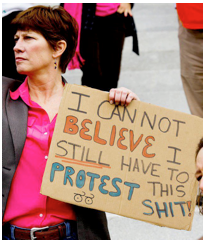 WOMEN’S RIGHTS - On January 28, Jessica Valenti delivered a keynote address about anger, activism and reproductive rights to the staff and supporters of Planned Parenthood Gulf Coast, in Houston.

I’m honored to be in a room with such incredible activists and supporters of the wonderful work PP Gulf Coast does—so thank you for having me here.

Given that there’s news on women’s reproductive rights every day (most often none of it good), when I was thinking about what to say today, I had a hard time narrowing it down.

It’s really difficult to articulate the nuance and the complexity of issues like activism, women, politics, bodily integrity. Then I was reminded of this protest sign that I saw a picture of, and I wanted to share it with you because I think it perfectly captures the sentiment of this particular moment in the fight for reproductive rights:

There’s something about it—it’s simple, it speaks to all generations. And this is actually a picture from a demonstration in Virginia when the state was trying to mandate transvaginal ultrasounds for women seeking abortions—a mandate I know you all know very well because Texas was also on its way to passing one when this protest occurred.

So I wanted to show you this picture because it’s funny, but I also wanted to share it because there’s a story behind it.

I had posted a picture of this sign and a few others (and maybe they had a few more curses on them)—and I got an e-mail from a young man who asked me a question that I get asked a lot: Why are you so angry?

I imagine a lot of us in the room have been asked some iteration of this question. It’s a common one when you’re a feminist. Calm down, why are you so worked up? You seem so pissed off. And it’s a stereotype, really, of feminists—that we’re all angry.

So I was thinking of how I could respond this young man…and this is what I came up with, and I wanted to share it with you.

It’s not that I’m angry. I’m exhausted. The war on reproductive health and autonomy feels absolutely never-ending. In 2011, there was a record number of anti-choice laws enacted across the states and in 2012, we saw more than forty new state laws restricting women’s access to abortion.

The restrictions ranged from TRAP laws and ultrasound mandates to waiting periods and mandatory counseling—all of which end up hurting the most marginalized women in the US by making legal medical care more costly and harder to get. So while I’m thrilled that we’re celebrating Roe’s fortieth anniversary—if women can’t access abortion, then it’s not really legal for all of us.

If the Hyde Amendment still exists, then Roe doesn’t mean anything for the woman who can’t afford care. And if one woman in Texas can’t get the care she needs, then Roe isn’t fulfilling its promise.

I’m exhausted thinking about the fact that I’m still fighting a battle that my mother marched for. That so many years later, we’re working so hard to hold onto the rights we already have, that creating a proactive—rather than defensive—agenda seems like a pie-in-the-sky dream.

So it’s not that I’m angry. It’s that I’m shocked. Shocked at the extreme lengths some legislators will go to limit women’s reproductive freedom.

One provision in Arizona allows doctors to withhold medical information from a woman about her pregnancy if they think it might compel her to get an abortion. So if your pregnancy is in danger, if your fetus has an abnormality—a doctor could keep you in the dark and that would be absolutely legal.

I’m shocked that given all of the ridiculous things said about rape recently, that a New Mexico law-maker thought it made absolute sense to propose a bill that would make it a third-degree felony to have an abortion if you were raped. A rape victim who had an abortion could go to prison for three years for “tampering with evidence.”

I’m shocked that when Ohio tried to pass their anti-choice heartbeat bill that would outlaw abortions as early as six weeks, they had a fetus “testify” by giving pregnant woman an ultrasound in front of the House. The pregnant woman didn’t speak, appropriately enough—only her fetus was allowed to make an appearance.

I’m shocked that in 2012, that there could actually be a controversy over birth control—something that we thought was a done deal decades ago. I’m shocked that in one county in North Carolina, the county board of commissioners unanimously voted to turn down a state grant that would cover birth control. The Chairman said, “If these young women are being responsible and didn’t have the sex to begin with, we wouldn’t have this problem.”

It’s not that I’m angry. I’m incredibly sad. Sad knowing that the people these laws will affect the most are the ones that need care the most—they’re the most marginalized among us: young people, women of color, low-income women, those that can’t afford to travel across the state or to take days off of work to access care.

I’m sad that women’s health and lives have become secondary to their ability to conceive. I don’t think any of us can forget HR358, the ironically named “Protect Life Act” that would have allowed hospitals and healthcare providers to deny sick women life-saving abortions.

I’m sad—heartbroken, really—that a woman here in Texas who found out that her wanted pregnancy was doomed was not only made to carry her sick fetus for twenty-four more hours because of a waiting period, but was actually forced to have another sonogram—her third of the day—and listen to a doctor describe her fetus in detail. When she wrote about her experience in the Texas Observer, she called it a “superfluous layer of torment” and recalled sobbing throughout the entire procedure as the doctors and nurses apologized for what they were being forced to do.

They call these laws a “Woman’s Right to Know.” As if we don’t understand exactly what is happening to us. As if we don’t already know that our well-being and health have nothing to do with laws that are created to make difficult days as awful as possible.

So yes, I’m exhausted and I’m shocked and I’m sad—and you know what? I am angry. I am furious. And I think I have a right to be.

I’m angry that if we use birth control or want our healthcare covered, we’re called sluts.

I’m angry that if we’re worried about attacks on contraception, we’re told to just put an aspirin between our knees.

I’m angry that the government can mandate that women have unnecessary invasive medical procedures, and that if we don’t like it we should just “close our eyes” or “look away.”

I’m angry that forty years after Roe, women are still fighting for recognition of our basic humanity.

We do it because we know that the women who seek care from Planned Parenthood need help and support, and sometimes the day that they’re there is a really hard and scary day, and we want to make sure that someone is there for them.

One woman who came to Planned Parenthood Gulf Coast wrote to them about her experience of care there. She had previously identified as “pro-life,” and then she found herself with an unplanned pregnancy and needed help—and of course Planned Parenthood was there for her. She wrote:

“The one woman who will forever be a part of my heart was the ‘hand-holder’ volunteer. She was an angel of a woman who held my hand and told me everything was going to be okay. Her strength and nurturing way were remarkable…. Not once throughout this process did I feel judged.”

Sometimes when you do work like this, it’s easy to get lost in the enormity of it all—because these are enormous, important issues—women’s health, our right to bodily integrity; it’s a tremendous responsibility and it can feel incredibly overwhelming.

But at the end of the day this is about changing lives one person at a time. Yes, there are laws we need to fight against and laws we need to fight for to ensure that we can do this work, but what we have to remember is that the reason we do this is to help one person—the one person who is in front of us in a particular moment who needs help now, regardless of how much money they have, or what their gender identity is, or whether or not they call themselves pro-life.

And maybe that seems like simplifying the issue, but I think it’s the most important part of the work that Planned Parenthood does. Because to that one person that you’ve helped, you’ve changed their entire life—you’ve shifted the trajectory of their future, and increased their sense of well-being and safety.

You’ve ensured that on what may be the worst day of someone’s life, in a moment when it felt like no one could help them—you were there.

Sometimes we’re even fighting for a person who doesn’t know she’s going to need help down the line—but we’re there, making sure that if and when she does need support she will absolutely get it.

And that’s why I think the work that Planned Parenthood does is so life-affirming. You’re showing people that their health and lives matter, that their experiences matter. Most importantly, you’re showing them that they’re not alone.

And that’s what I think of when I think of Planned Parenthood and the work that so many activists in Texas and across the country are doing. It’s not about birth control or abortion. It’s about compassion, and community, and the insistence that women be respected and supported. It’s about affirming our basic humanity.

So in spite of the sadness and anger I feel when I think about how women’s rights are attacked, when I’m in a room like this one, what I feel the most is gratitude.

I’m grateful for the generation that came before me who continue to fight and who paved the way. I’m grateful for all of the amazing young activists who fight this fight despite being told over and over again that young people don’t care about reproductive justice—a myth that is very far from the reality I see every day.

I’m grateful to the people who support Planned Parenthood—be it through time and energy, or through their pocketbooks.

And most of all, I’m grateful for what we create when we come together in a room like this. It’s more than just activist energy, it’s community. A community of compassion, of understanding, and a community of non-judgement.

So thank you, for letting me be a part of your community today, and thank you to Planned Parenthood for showing the women of Texas that they are not alone.

(Jessica Valenti is the author of three books, including The Purity Myth: How America’s Obsession with Virginity is Hurting Young Women, which was recently made into a documentary. She is editor of the award-winning anthology Yes Means Yes: Visions of Female Sexual Power and a World Without Rape and the founder of Feministing.com, which Columbia Journalism Review calls “head and shoulders above almost any writing on women’s issues in mainstream media.” Jessica was the recipient of the 2011 Hillman Journalism Prize and was called one of the Top 100 Inspiring Women in the world by The Guardian. This article was posted most recently by The Nation and CommonDreams.org)