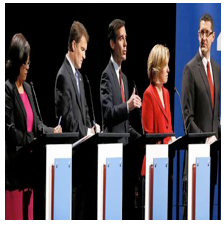 URBAN PERSPECTIVE - With every recent past candidates forum in South Los Angeles, it is hard to distinguish Los Angeles Mayoral candidates from each other. Their vote-for-me presentations don’t allow for much differentiation, except for Kevin James who asks “how long is too long to tolerate what South LA has been getting for years”. It’s no wonder why many constituents in South LA are still undecided about who’s the best mayoral candidate with their interest in mind.

All campaign promises are meant to be broken, right. That’s the truth about politics that causes South LA residents to approach this election race with cynicism.

Anyone of these candidates can be tossed up and laid on a “likelihood” game board to see who can deliver or get close to advancing South LA. And for Let’s Make A Deal, South LA Angelinos have to guess who’s behind curtain number one for employing African Americans and Latinos in City leadership roles in their administration, Commissions, or heads of departments; or curtain number two, for policy rhetoric and commercial antics that on face value gives South LA a misconception something will be done beyond a façade like the Future of South Los Angeles Conference.

Forget the personalities, endorsements, and perceived beholden commitments. Look at the track or voting record and genuine “give a damn” commitment to South LA. Yes, the Mayor is for Angelinos in general, but a leader with a backbone and concerted attention to improve South LA’s quality of life, jobs, education, and transportation would be nice.

This is a who’s game of seeing how resources will be distributed fairly based on need. Who will be the candidate to get transportation right in an area where bus service has diminished for it poorest residents due to an emphasis on light rail? Who will ensure a stop at Leimert Park and underground rail system? Who will build on South LA as an economic viable engine for international trade and other industries? Who will expand youth development activities?

Popularity is not going to win this contest if the issues of same decade old problems with different conversations exist. Mayoral candidate Kevin James has it right in saying, “how long is too long for South LA?” The undecided voters are looking for the answer to that question, but which candidate is going to distinguish him/herself as the South LA candidate for change.

(Janet Denise Kelly is a CityWatch featured contributor. She offers more than a decade of accomplishments in the housing and nonprofit sector. Janet brings valuable insight in the areas of community and economic development. Additionally, she brings knowledge regarding the leadership and management challenges faced by large and small nonprofits that are struggling or growing organizations. She blogs at jdkellyenterprises.org and can be reached at: janetdkelly@yahoo.com) –cw