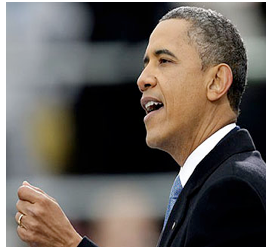 The second one for Barack Obama, the 57th for our republic, was no less. The pomp and ceremony of this transfer or continuation of power changes tenor with the party or candidate. President James Madison was the first to host an inaugural ball charging attendees $4 each to attend. In 1841, President William Henry Harrison gave his speech of some 8,445 words that lasted two hours in the wet winter of Washington DC that year. Thirty days later, he died of pneumonia. So much for being long winded.

As much of a skeptic as I am about overtly patriotic displays, I have to say that this one played to some very deep and passionate strings of Americanism that were quite powerful and moving.

From the use of both the President Abraham Lincoln’s and Dr. Martin Luther King’s Bible — on MLK day no less — to the musical arrangements of our national anthems and the artists that sang them, these elements held particular contemporary meanings.

And, the meanings gave these often sung songs new context. Who knew that the US Marine Corp band was capable of playing them in anything other than the traditional way? Does it matter whether or not Beyonce was “lip-syncing” the anthem? Not really. It was the pageantry that mattered.

What was probably the most notably brilliant piece of political ceremony was Obama’s Baptist minister-like use of the refrain, “We the people,” from the Declaration of Independence. This not only shifted the focus off of the idea of his vision over to the core fundamentals of the American creed of “life, liberty and pursuit of happiness.”

This clever, and I presume sincere, use of this most revered founding document steals its meaning back from the right-wing Tea Partiers and places its core principles in the heart of the liberal Democratic agenda.  Obama’s detractors would find its meaning hard to deny, for in doing so, they would have to challenge something very fundamental about the assertions made in the Declaration of Independence and thusly about America itself.

In short, Obama has wrapped himself in more than just the patriotic symbolism of the flag and God, but in the fundamentals of our republic.

He is keenly aware of his place in America’s history, as its first black president and the transitional role that this has for both his legacy as a US President and the next 30 years of American politics.

He has also learned the hard way about trying to negotiate inside the beltway on a bipartisan basis.

Even as they are taking down the red, white and blue bunting from the capitol, the machine that elected Obama into office is morphing into “outside the beltway” activism.

Clearly, this should have been done more than two years ago before the Democrats lost the majority in the House of Representatives, but at least he is willing to learn on the job.

I, however, am not fully convinced that this administration nor any administration can move this country to a more enlightened progressive national agenda. One that is not controlled by Wall Street bankers and the military industrial complex that even now, with the winding down of the Afghanistan war, is looking to ramp up a new conflict in Mali and Algeria. War and endless war, often called “peacekeeping,” echoes from George Orwell’s 1984 where, “war is peace” and the drones now used for the clandestine war on terror will be brought home to spy on our every move.

Our countrymen have come to accept the predicament of sacrificing liberty for security to which Benjamin Franklin once opined, “Those who would give up essential liberty to purchase a little temporary safety deserve neither liberty nor safety.”

(James Preston Allen is the Publisher of Random Lengths News and an occasional contributor to CityWatch. More of Allen and other views and news at  randomlengthsnews.com where this column was first posted) –cw