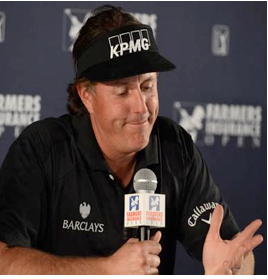 HOW DOES CALIFORNIA KEEP ‘EM FROM LEAVIN’ HOME?- Phil Mickelson, pro golfer, … aka Lefty …  is thinking of leaving California and perhaps America because, according to his own reckoning, he is facing tax rates of 62% or 63%. Mickelson, probably the second-most-famous professional golfer in the world after Tiger Woods, later backed off from his initial comments about making "drastic changes."

Reports suggest that Mickelson earned more than $60 million in 2012. In that sense, he appears to be doing better than the Romneys, and perhaps you are not all that sympathetic to him.

The Romneys (remember them?) paid so little tax. In 2011, Mitt and Ann Romney paid federal taxes of $2 million on reported income of $14 million, for an effective tax rate of 14%, all roughly. The Romneys even had to foreswear taking all of their available charitable deductions to make their tax rate seem so high for appearance's sake.

It does bear noting that Mickelson is doing something to earn his $60 million. Whoever is paying him that much believes that he is worth it. Who are we, really, to argue?

Mickelson's instinctive reactions to high tax rates, even if his math may be a bit muddled, are sound and sensible ones. Tiger Woods certainly agrees with him.

But that is not the problem in the story. Lefty faces such seemingly inescapably high tax rates that he might just pack up his golf bags and leave home. Mitt pays so little tax that he has to ignore the law to pay a higher rate for appearance's sake.

How can this be?  (Read the rest and find out here.)