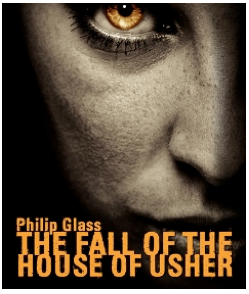 PERFORMING ARTS LA - Long Beach Opera continues its exploration of Philip Glass this week, as it tackles his 1987 opera The Fall of the House of Usher, based on the Edgar Allan Poe short story.

At 90 minutes, it might also be called a short opera, although it contains the elements of musical high drama and song that we expect.

Many of us will remember the title of the Poe story from our school days, even if we don't remember the plot, such as it isn't. Summarized in two sentences, somebody named William is summoned by his old friend Roderick Usher to visit at the ancient ancestral mansion of the same name. Bad things happen.

Or maybe they are just the result of fevered imagination and horror in the operatic, if not the short story version.

A few snippets: Roderick is suffering from some unnamed malady of the body and spirit. Poe, speaking through his narrator William, talks about terror, grief, and depression, as if they were subject to some other worldly version of Newton's laws of motion.

The action on stage insinuates that the madness and decay Roderick is suffering is due to his repressed homoerotic, or possibly incestuous, feelings. Could be both.

This may be to take Poe forward to the age of Freud, but it seems a little trite in the modern era. One of the company's managers referred to this production as controversial. It didn't seem all that controversial to the audience, who clapped and cheered for the performers and the conductor.  I suspect that the modern audience (at least LBO's audience) isn't terribly shocked by a little bit of insinuating about the multiple variations love takes. Gosh, it's even been talked about in a presidential inauguration.

By the way, there may be a bit of this in Poe's original narrative, but you have to look hard. The story can be read a lot of ways, as anything from a ghost story to a religious allegory to Poe having fun with terrorizing his readers.

Philip Glass, as composer, attempts to put the tension of the story line into a musical line. As Glass describes his style, it is "music with repetitive structures." To the listener, it means that we get to hear a particular musical theme rendered with a concentrating rhythm a lot of the time. To this listener, the music was, so to speak, musical, unlike some other experimental efforts of the modern era.

Suzan Hanson shines as Roderick Usher's sister Madeline. She isn't actually given words to sing, but a soprano version of crying and moaning in the form of an extended vowel. As Hanson and conductor Andreas Mitisek pointed out, it would have been nice of the authors to give her an "Ohh" every now and then, rather than just the "Ahhh." In practice it works out well, in spite of its trying effect on the performer.

The Fall of the House of Usher will be performed Saturday and Sunday, February 2 and 3, in San Pedro at the historic Warner Grand Theater. For performance details, go to Long Beach Opera.

Long Beach Opera is doing this year what it has become known for, that is to say, putting on operas that are new to the audience and sometime challenging. Or as one visitor remarked to the house manager, "You can't just keep going back to Madame Butterfly."

(Bob Gelfand is a CityWatch contributor and a member of the Coastal San Pedro Neighborhood Council, where he created the San Pedro committee on cultural affairs. He can be reached at amrep535@sbcglobal.net)