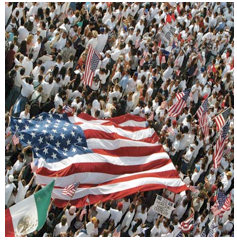 ALPERN AT LARGE - As I stated in my last CityWatch article, 2013 will be the Year of the Numbers.  It focused on transportation-related numbers, but there are many other numbers important to Americans that relate to the thorny issue of immigration, the struggling economy and our ballooning debt.

Yet while people aren’t just numbers, we’re not in any position to ignore the sobering economic figures or the need to tap into that greatest and most bountiful of resources—the human spirit and work ethic that can get beyond numerical restraints.

The President and Congress are both finally turning their collective eye on immigration reform … long an issue of significance to Angelenos and Californians … and have agendas and goals that appear focused on determining an acceptable pathway for illegal immigrants to become American citizens.

Clearly, the elections of last November have forced the hands of many in both parties (particularly the GOP) to reconsider immigration reform efforts—the numbers in key battleground states leaned so heavily Democratic because of the impact of Latino voters that many believe the GOP must embrace some sort of immigration reform in order for it to survive as a political party.

Yet the theoretical pragmatic sentiments towards “reforming immigration” fly in the face of both theoretical and pragmatic realities of “being a nation of laws.”

The last time comprehensive immigration reform was attempted occurred during the second term of President George W. Bush, but concerns about being too soft on border enforcement, too soft on those thwarting existing immigration laws, and a backdoor form of amnesty killed the bill and cost Bush support from his own political base.

Fast forward to the year 2013, after a host of unpopular bailouts to Wall Street, Detroit, and upside-down mortgage holders, as well as a Latino backlash against Mitt Romney’s statements that illegal immigrants would “self-deport” if current immigration laws were actually enforced, and the notion of being forgiving to illegal immigrants doesn’t seem so strange.

Suddenly, GOP strategists and political leaders are more open to putting the immigration issue behind them, although it’s uncertain whether they’ll work with a second-term President whose inauguration speech was by far too confrontational to encourage bipartisan cooperation.

To the cynical eye, the origins of GOP outreach to Latinos almost certainly must be based more in self-interest than in any true change of heart.  However, there are no shortage of conservatives and no shortage of Latinos who now advocate for compromise and a new version of comprehensive immigration reform to return significant numbers of Latinos back to the GOP fold.

The Democratic Party is clearly favored by most Latino voters, but embracing too generous and/or lenient a form of comprehensive immigration reform (a.k.a., an amnesty) might cost support by unemployed, native-born Democrats and by immigrants who’ve been put through the long and onerous pathway to legal immigrant and citizen status.

However, after Latino donors played a major role in President Obama’s re-election efforts, and with growing Latino interest in union membership the Democratic Party also has significant political upsides in cementing its alliance with this surging ethnic group.

Yet people are more than a number--Romney’s infamous “47 percent” statement that dismissed roughly half the American population as hopeless takers arguably cost him the presidential election, and the GOP is continuing its effort to distance itself from that statement--including Romney’s former running mate Paul Ryan.

No one wants to be relegated to being a number, and this issue is too important to be oversimplified.  Latinos aren’t all immigration law-breakers, and for that matter white Americans aren’t all racists (of either political party).  The racial rivalries affecting Latinos are more “brown versus black” in nature than they were in past generations, and Latinos are inherently swing voters.

Furthermore, immigration reform isn’t only about Latinos (as Asian immigrants and others will gladly testify), and legal immigrants continue to be ignored by too many who have set their sights only on those who’ve elected to not play by the rules.  However, the talking points surrounding immigration are focused on Latinos—and, in particular, Latinos from Mexico.

The answers to comprehensive immigration reform that are likely to please most Americans (of all political bents) must be premised on the concepts of enforcing our current laws, as well as electronic verification of employees as legal citizens or immigrants, border enforcement, and a true commitment to repaying the American taxpayer—not just the token fine supported by former President Bush.he answers also lie in focusing on what actions and attitudes are required to become an American.

There is already a pathway for illegal immigrants to become Americans through military service.  For those unwilling or unable to pursue that pathway, the options of community service or teaching or other temporary sacrifice for 2-3 years are demonstrable methods of both paying back the taxpayer and showing where one’s heart truly lies.

Consistent with those sentiments are the need for those seeking a pathway to citizenship to master American history and civics (Latinos, both legal and illegal, just learned the latter in the City of Bell), master a working knowledge of English (necessary to find employment, and to speak and bond with Americans of all ethnicities), and demonstrate a clear and focused loyalty to the US.

In other words, asking for American citizenship means paying a price for this most valued treasure in our modern world.  Refusing to speak English to either white, black, Asian or other Latinos (even when one is truly bilingual) won’t cut it, and neither will going over the line with epithets demonizing U.S. soccer players while rooting for foreign teams playing on American soil.

It’s reasonable for those seeking immigration reform to know which applicants wish to become part of the tapestry of the United States (an immigrant) versus which applicants want the economic benefits but consider themselves apart from that tapestry (an alien).  It’s also reasonable to spend more time thinking of, and respecting, those immigrants who are actually trying to become a citizen in a legal manner.

Latinos just learned what power they have at the voting booth—in Bell, at the state level, and at the federal level.  Any immigrant, of any ethnicity or geographic background, will have the responsibility of improving our economy and fixing our staggering debt problem.

Immigrants are supposed to be able to ensure and support an economic recovery, and are supposed to relieve, and not exacerbate, the debt affecting our public sector coffers.  They, as well as native-born Americans, are more than mere numbers—but it is their and our sweat equity that is the surest and most necessary way to fix the number problems that threaten this nation’s present and future.

(Ken Alpern is a Westside Village Zone Director and Boardmember of the Mar Vista Community Council (MVCC), previously co-chaired its Planning and Outreach Committees, and currently is Co-Chair of its MVCC Transportation/Infrastructure Committee. He is co-chair of the CD11 Transportation Advisory Committee and chairs the nonprofit Transit Coalition, and can be reached at Alpern@MarVista.org This email address is being protected from spambots. You need JavaScript enabled to view it. He also co-chairs the grassroots Friends of the Green Line at www.fogl.us.   The views expressed in this article are solely those of Mr. Alpern.)