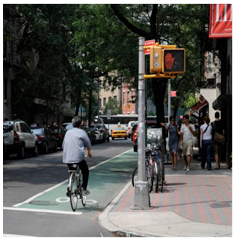 CROSS TALK - As I began reading Jeff Jacobberger’s CityWatch article  (City Hall Will Get Its Money for Road Improvements, But First Voters Need a “Complete Streets” Plan) I was hopeful to see some information about how the City was going to implement AB 1358, the Complete Streets Act. Unfortunately that was not the case.

Instead it was an ode to the City’s delusional and non-transparent attempt to update the Transportation Element primarily through the update of the Bicycle plan using the blog and little else.

If you go there and check it out as I just did you will find that you missed a meeting on Friday 1/25/2013.

It is way beyond time for the City to officially start the update to the Transportation Element and implement Complete Streets. They need to do a Notice of Preparation (NOP) for an Environmental Impact Report so that everyone can weigh in on what must be a public process.

In many areas the installation of Bike Lanes will require the removal of Street Parking. This will present particular hardship to residents and businesses in older neighborhoods where the street is the only place to park.

I also see nothing about seniors and those with disabilities in this Transportation update. We are an aging population and everyone needs to be brought into the mix. We must comply with

AB 1358 requires cities and counties to include complete streets policies as part of their general plans so that roadways are designed to safely accommodate all users, including bicyclists, pedestrians, transit riders, children, older people, and disabled people, as well as motorists. Bicycles are only a part of Complete Streets and the City needs to address the rest of AB 1358.

The State of California in its 2010 Update to the General Plan Guidelines (Complete Streets and the Circulation Element) lists the following:

Mr. Jacobberger is an advocate for more bicycling.  He is hard working and tireless in that pursuit.  We certainly need more options to get around LA but many of us want our voices heard. We also want real involvement in the process. The fact that only 25% of Neighborhood Councils  responded to the great streets, great neighborhoods tool kit does not seem like a whole lot of involvement.  Did those that responded distribute them to their stakeholders for comment?

We are the young, the seniors, the people with disabilities and sometimes just people who love to walk. We want our voices heard and in order for that to happen, the City needs to make the process open and informative to all. Currently it is not.

(Jim O’Sullivan is a long-time community activist and Chair of the Miracle Mile Residents Association.)