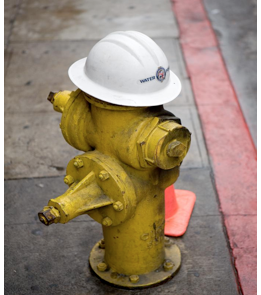 LA WATCHDOG - The controversial (and possibly illegal) transfer of $250 million from our Department of Water and Power to the City’s General Fund has not satisfied the voracious appetite of the Herb Wesson-led City Council for the Ratepayers’ hard earned cash.

As part of its $20.2 million invoice for Special City Services, the City and the Los Angeles Fire Department have now concocted a “reasonable” $3 million charge for services rendered by the Fire Department to DWP.  These services include responding to “fallen power pole and lines, downed transformers and water main breaks as well as providing other services at the request of DWP.”

Fire Chief Brian Cummings indicated that the Fire Department will prepare a time study to justify this new charge.

That is an excellent idea.

And while they are it, why not investigate an array of other charges that DWP and its Ratepayers are funding.

Why is DWP being hit up for $1.6 million this year to reimburse the Fire Department for inspecting the City’s fire hydrants, which, for some bizarre reason, are still owned by DWP?

The DWP and the City ought to review the reasonableness of Garcetti initiated 2010 transfer of $28.9 million from the City’s Fire Hydrant Installation and Main Replacement Fund to the City’s General Fund, especially in light of the need to replace aging fire hydrants and water mains.

The City and DWP must also investigate all of the “pet projects” of the Mayor, the Council Members, and their cronies that have been surreptitiously financed by the Ratepayers without our knowledge or consent.

These “pet projects,” which have cost Ratepayers more than $1 billion, include, but certainly are not limited to, the Children’s Museum, the Los Angeles River, Elysian Park, the Silver Lake Reservoir, the Griffith Park water system, the absorption of 1,600 City workers and their unfunded pension liabilities, and the IBEW Labor Premium.

The DWP and the City should justify the underlying costs associated with the $250 million transfer fee (tax) from the DWP Power System to the General Fund and whether this fee (tax) is legal as a result of the passage of Proposition 26 (The Supermajority Vote to Pass New Taxes and Fees Act) in November of 2010.

Of course, Fire Chief Cummings, Jose Huizar who is charged with the oversight of DWP as chairman of the Energy and Environment Committee, and City Council President Herb Wesson will spin a tall tale that this new creative service charge is “reasonable” and in the best interests of the City.

It is as reasonable as the $204,000 average compensation package for the over 3,500 positions in the Fire Department.

What the management and the Ratepayers do not need is a meddling City Hall that is constantly distracting management, undermining its hard earned credibility, and view DWP and its Ratepayers as its ATM.