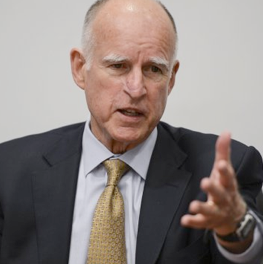 Gee, Jerry Brown must be giving a speech.

Add to those quotes a rapid-fire summary of 250 years of California history, a locker room pep talk and shout outs to legislators, voters, unions, business leaders, teachers and students and you have this year’s state of the state address, a dizzying survey of California’s past, present and future that could only have come from the fertile mind of the state’s impossible-to-categorize governor.

There was something for everyone in Thursday’s State of the State speech.

For liberals, there was concern about climate change and global warming, along with a call for a legislative special session to deal with the new federal healthcare legislation.

Conservatives could focus on Brown’s promise to let local school districts have a bigger say in how they educate their students, instead of having “distant authorities crack the whip, demanding quantitative measures and a stark, single number to encapsulate the precise achievement level of every child.”

“We seem to think education is a thing – like a vaccine – that can be designed from afar and simply injected into our children,” the governor said.

And for the vast majority of Californians, whose politics aren’t fixed on the edges of the right or left, Brown repeated the promise he made during his successful push for November’s Prop. 30 tax increase: Fiscal discipline and a pledge to “guard jealously the money temporarily made available” by the measure.

But it’s good to be the governor and Brown spent time focusing on his both his pet projects and pet peeves.

High-speed rail is the future of transportation, he said, and is moving ahead in the state.

“Yes, it is bold, but so is everything else in California,” Brown added.

Then there’s the governor’s plan to build a pair of massive tunnels, 30 miles long and 40 feet wide, to move fresh water under the Delta to Central Valley farmers and Southern California cities at a total cost of around $23 billion.

“Yes, that is big, but so is the problem,” Brown said.

And where will the money for these massive projects come from? Let’s just say details, especially inconvenient ones, typically aren’t a part of any state of the state address.

The governor also continued to grump that the Legislature passes too many laws, “constantly expanding the coercive power of government by adding so many minute prescriptions to our already detailed and turgid legal system.”

“Lay the Ten Commandments next to the state Education Code” if you want to see how far modern government has strayed from its roots, he complained.

In the end, the speech, like many others Brown will make this year, was a balancing act, tempering the optimism flowing from  a state budget that’s finally out of the red with the pessimistic realization that there are never any guarantees when it comes to California’s finances.

“The budget is balanced, but great risks and uncertainties lie ahead,” Brown said.

The governor spent plenty of time Thursday revving up the crowd – and the state – with his upbeat assessment that “California is back … and we’re on the move.” But he also knows that his most important job is 2013 is to be, as was once said of the Federal Reserve, the guy who takes the punch bowl away just as the party gets going.

(John Wildermuth is a longtime writer on California politics. This column was posted first at FoxandHoundsDaily.com)