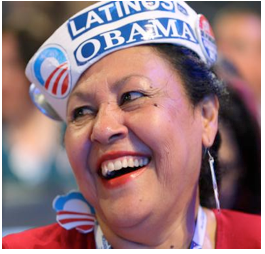 BLOG SOUP - So, apparently the GOP is moving on immigration reform on the basis of this AEI study which allegedly showed that the Latinos would vote for them if they do it. I don't see that in the charts they provide (only a possibility that some of them might vote for them) but if they are willing to take the chance --- and their base lets them get away with it --- immigration reform is necessary on the merits so I don't really care if it benefits them or not.

But the truth is that it probably won't. Jamelle Bouie points out the obvious reason:

The reason is straightforward: Latinos are more liberal than the median voter. According to the most recent Pew poll on these questions (released last year), 75 percent of Hispanics say they support bigger government with more services, compared to 41 percent of the general population. Fifty-one percent say abortion should be legal, and 59 percent say “homosexuality should be accepted by society.”

There just isn’t much appetite among Latinos for the traditional small government approach of the GOP. Comprehensive immigration reform may reduce hostility towards the Republican Party, but it won’t increase vote share.

In the past the Republicans have relied on certain stereotypical patriarchal notions on social issues to appeal to Latinos. And there was some small success for a while. But the times they are a changin' on that set of issues across all of American culture and as Bouie points out Latinos are among them.

With the exception of abortion rights (which is only opposed by a majority of first generation immigrants) Latinos are quite liberal. There isn't much room to move on that either.

I don't know what the Republicans plan to do to appeal to this community beyond immigration reform, which presumably is simply a case of no harm no foul for Latinos since the Democrats favor it too, but I'm not sure what the GOP can do to appeal to them.

Needless to say, they are going to have to deal with their own angry base on this, an angry base which was just two years ago passing laws to make it permissible to ask anyone who "looks like an illegal" for their papers.

I'm going to guess those folks aren't going to be particularly happy about any of this. So, they're in a pickle.

They simply have to start appealing to some members of the Democratic base. And they seem to think they have a chance with this growing bloc. But that's not going to be as easy as they think it is. I don't know where they're going to turn, frankly.

Digby is the pseudonym of progressive political blogger Heather Parton from Santa Monica, California who founded the blog Hullabaloo … where this commentary first appeared.)