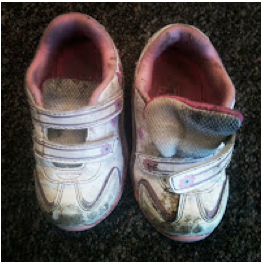 MY TURN - The teacher at a Wilmington Elementary School kept the two boys behind at recess. Why, the fourth grade teacher asked, were they fighting -- a little tip he'd received.

The boys shuffled about until the true confessions flowed out from the smaller student.

The larger boy, he admitted, was bullying him -- about  his shoes. One of his sneaker's soles gaped open like a shark's mouth.

I had just finished up a volunteer writing workshop in that class and my head hurt that a kid was hassled over his sneakers making me think of a friend Jennifer Marquez; she mentioned recently that she had snagged a big score for the non-profit where she works.  It was 150 pairs of shoes. Shoes for needy kids.

Before stumbling into the bullying incident, I called Jennifer to do a story about her unique job.  She collects gifts-in-kind for Shelter Partnership, a non-profit dedicated to resolving the crises of homelessness that serves 51,000 homeless in Los Angeles County and collaborates with 200 other agencies.

But now I was calling her to see if she had extra shoes for the Wilmington student. Because of her efforts, Payless Shoes awarded Shelter Partnerships 150, $20 vouchers to shoe the feet of needy children for a third year in a row. Half were slotted for San Pedro children; the other half will be donated near the end of the month through the Union Rescue Mission.

It was a generous offer Payless does nationwide each year.  Despite that it's much smaller than the case and palette loads that roll into non-profit,  the donation is considered just as precious.

Often homeless children get shoes, but never have the chance to select them.

"This is a fantastic donation because the kids from the shelters get to pick them. They get to try them on," Jennifer explained. "Otherwise, they get shoes that don't fit or they are not the right style. The fact the kids are able pick out and try on their own shoes is really exciting."

When I told Jennifer about the student, I could hear her heart melt over the phone. Her voice softened and stirred with compassion.

She could set aside shoe vouchers for the boy and two siblings, but the parents must call the collaborating agency, the YWCA Harbor Area, to register. Sometimes, she added, parents won't call. Sometimes, they are too proud, ashamed, scared or shy.

On any given day, when Jennifer's phone rings, she might hear on the other end that a business wants to donate 4,000 diapers. Or maybe there's thousands of rolls of toilet paper or 50 cases of shampoo or hundreds of cases of soap --  all at the top of the list as necessities for the homeless. Perhaps  a shipment of toys comes in or stacks of unused clothes.  Jennifer's job is to solicit donations and she frequently arranges the trucks to pick up the goods and ensure the companies receive good service.

"Every day is different and I'm motivated to get items that might end up in landfills. I'm  frequently having trucks do pick-ups," she says. "We'll have anything from brand new apparel, arts and crafts to 2,000 toys coming in from Mattel. We are the number one recipient of Hasbro in the state of California.

"I try to give them the Cadillac treatment."

Having worked for homeless-related non-profits for 20 years doing fundraising and grant writing, it wasn't until she landed the gifts-in-kind job seven years ago for Shelter Partnership that she really found her niche.

Simply put, her job is to stuff a 108,000 square foot warehouse in Bell with donated brand new goods needed by the homeless -- anything new can be collected including underwear and socks.

The largest donation Shelter Partnerships ever received was 16 semi trucks full of toothbrushes. The oddest: cellulite cream and disposable spa underwear, she said.

On occasion, the non-profit will also receive counterfeit items after U.S. Customs seized them from ships in the Port of Los Angeles.

While some businesses want the confiscated articles destroyed, others have turned them over to the agency. That's how hundreds of little girls were able to receive counterfeit Dora backpacks and some homeless received new Mercedes polo shirts.

To obtain those donations, the agency agreed to have volunteers and employees cut out every label, Jennifer explained. Because the non-profit guarantees that the collected goods will not be sold, pickups of surplus donations have attracted the likes of Disney, Hasbro and Mattel Inc.

Since she was young, Jennifer has been concerned about other's plights. First, the Girl Scouts made her aware of them. She learned more later when she volunteered to work with adults in the later stages of HIV and critically ill children.

She has a powerful drive to helping those in poverty -- especially kids -- who suffer from things like parents using newspapers as diapers.

"What happens is when people lose their jobs  or are facing poverty, they don't have money for essentials, said the San Pedro mother of two boys, 7 and 9. "They are choosing between food or shoes for their children. The kids in the shelters, they want to blend in. Children don't choose the situation.

"They don't chose their parents. They don't want to be the kids with the holes in their shoes. They are innocent victims of poverty."

Shelter Partnership's doors are open to businesses and manufacturers that want to donate surplus  instead of dumping them in a landfill. Then the non-profit disseminates them to shelter agencies that need the supplies.

Top of the list of  the non-profits  needs -- and all must be new --  are hygienic products: diapers, soaps, toothpaste, shampoos, toilet paper, toothbrushes, hair brushes, and combs. In addition, new clothes, toys, bedding, crayons, pencils, papers, notebooks, and other products can be easily donated. Jennifer says she tends to work with shipments coming in by the caseload and pallet.

While most items are new, there are exceptions such as when the television show Scrubs was scrubbed. The program offered all the show's apparel, some of which had never been worn and others that had seen little use.

In early January, Jennifer and the collaborating YWCA of the Harbor Area, helped kids try on brand new shoes at a San Pedro Payless along with their parents and siblings. It was chaotic, with shoe boxes littering the floors, and mothers hugging the non-profit employees with sheer gratitude.

Brian, 7, of San Pedro was delighted to get new footwear.

"They are light and easy to walk in and good because it was getting colder," Brian said.

When the parents of Jasmine, 2, took her new shoes off and put her old shoes on, the toddler cried profusely and didn't stop until her new shoes went back on.

The mother of Jordan, 8, and Joceyln, 3, who came from Hawthorne but are YWCA clients, was thrilled, "because there are no programs like this in our area."

"Many of the children we selected for the free shoes were not chosen for our holiday adopt a family program," explained Rosa Martin, Administrative Coordinator, YWCA of the Harbor Area. "These families have needs all year not just at the holidays and are trying hard to support their families."

For the rest of us, who may not be touched by homelessness, Jennifer adds, "there is hidden poverty everywhere."

At her children's school, there were two children that were homeless last year, one was living out of a car. Both are now in better situations. This year, she adopted an elderly woman for Christmas who asked for small gifts, a blanket, a sweater and a scarf.

"You just don't know who's walking down the street who's not going to eat dinner tonight," she said.

At the end of January, another 75 children from Los Angeles, in collaboration with the Union Rescue Mission, will receive their shoes.

But as Jennifer warned me, I am sad to say the Wilmington boy's parents never called.

For more information about Shelter Partnership, visit www.shelterpartnership.org. Diana can be reached at hartchap@cox.net

(Diana Chapman is a CityWatch contributor and has been a writer/journalist for nearly thirty years. She has written for magazines, newspapers and the best-seller series, Chicken Soup for the Soul. You can reach her at:   hartchap@cox.net or her website: theunderdogforkids.blogspot.com) –cw