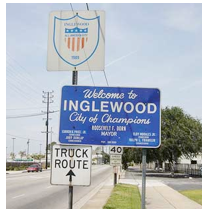 It was two minutes past 3 p.m. He had just picked himself up from a table he had shared with Inglewood Planning Commissioner George Dotson, one of the candidates running for Inglewood’s District 1 council seat.

Behind the counter stood Derrick Anthony Brown, the president of the Inglewood-based non-profit Sportsman Little League (which has its home base at Darby Park) and the owner of Bourbon Street Fish. Brown occasionally goes by the name Derrick Merridian, particularly when presenting himself publicly to the Inglewood city council.

The restaurant is prominently displayed on Dotson’s District 1 candidate website, and in all several photos Dotson appears proudly smiling.

Inglewood newspaper publisher Teka-Lark Fleming, on her way into the Bourbon Street Fish to meet with a veteran South Central newspaperman who had invited her there for a formal interview, paused to allow Dorn to exit the restaurant. She had observed Dotson as he watched her seeing Dorn get up from one of the three chairs at the table near the door.

Dotson remained seated, and only after Ms. Fleming had seated herself did he casually exit to sit in his SUV for several minutes. His vehicle faced the door of Bourbon Street Fish, and so it was easy to see him sitting and staring into the building through the open door.

Two minutes later, the man who had invited Ms. Fleming entered. There was but one other patron present and so it was easy for the newspaperman to identify the young woman whom he had invited.

Ms. Fleming had on hand a digital video camera, and she had it openly running on the table.

The interview with the other writer was recorded in full, and was colored with the interruptions of Brown asking if either party wished anything more. After nearly three-quarters of an hour, Brown’s interruptions appeared to prompt Ms. Fleming’s acquaintance to depart. As the other writer began to leave, Brown was heard on the recording stating he wished to ask some questions.

Within a few minutes, Brown persuaded Ms. Fleming to accompany him outside. Brown’s employees remained inside; outside was the noise of the heavy motor vehicle and air traffic that is well known along Prairie at 90th Street, west of the Forum. One might imagine that in the absence of witnesses and with the blanket of noise, the camera might fail to record the pertinent points of the conversation to take place.

Ms. Fleming, whom Brown had not asked to cease recording, had little to say as Brown’s tone of voice became increasingly agitated. The nervousness in Ms. Fleming’s voice grew as Brown’s confidence turned into apparent arrogance, and eventually became what may well have been a  threat: “You’re messing with the wrong guy when you’re messing with Derrick Brown. I’m gonna put something out there and see what happens.”

Brown was and remains a person intimately involved with a financial matter regarding significant funds controlled by the City of Inglewood. Brown maintains that former Inglewood mayor and current District 1 candidate Danny K. Tabor has nothing to do with such finances, apparently in answer to Ms. Fleming’s newspaper story in February.

Prior to what some might interpret as threat to Ms. Fleming, Brown made it clear that he and only he—and not Danny Tabor—was responsible for the financial position of Sportsman Little League.

Moments after Brown told Ms. Fleming “I’m gonna put something out there,” Brown and Ms. Fleming were approached by two people, both of whom can be briefly heard on tape.

Ms. Fleming stopped recording to observe California state law, which requires one to observe the right to privacy. Just before she turned off her camera, a man is heard asking a question, an apparently elderly woman is heard seemingly berating Brown for his tone of voice, and Brown is heard saying he’s a “nice guy.”

Calls to George Dotson were not returned at press time. Requests for a statement from Danny Tabor were not answered. Roosevelt Dorn could not be reached. When asked to offer a comment regarding the parking lot interview during which Brown appeared to have threatened Ms. Fleming, Brown would only tell this reporter that “if anyone wants to talk to [him], they better just come on down here and we’ll talk here, face to face.”