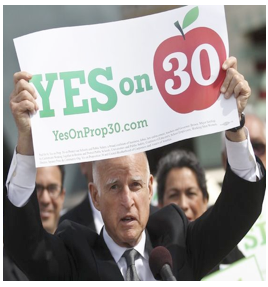 CAL WATCHDOG - Anyone who still believes that there isn’t monkey business in politics needs only to look at the most recent election and a significant legal ruling handed down on Friday regarding Proposition 30.  While it may seem too little, too late, this ruling does matter.

The California State Court of Appeals found that Gov. Jerry Brown and the California Legislature manipulated the ballot process, maneuvering Prop. 30 to land at the top of the ballot, above all of the other ballot measures. Prop. 30 increased taxes $6 billion a year.

I talked with Jon Coupal, president of the Howard Jarvis Taxpayers Association about this decision, and what impacts it will have on the legislative process, as well as budget bills.

Last July, the Howard Jarvis Taxpayers Association filed a lawsuit challenging the constitutionality of AB 1499, a bill rammed through the Legislature at warp speed under the protective cover of a “budget bill.”

AB 1499 cleared the way for Brown’s tax increase initiative, Prop. 30, to receive the number one placement on the November ballot. The bill altered the California statute regarding how ballot measures are placed on the ballot.

Brown was not only desperate to get his tax increase measure on the ballot, he needed it to stand out in the crowded field of ballot initiatives.

Because the budget now only needs a simple majority vote to pass, Democrats created the bill language, and then dropped it into a “spot” budget bill. If the bill had any language about tax increases, it would have needed a two-thirds majority vote by the Legislature.

The “spot” bill, an empty bill awaiting language, was shoved through the Legislature with such force, it passed in only two days. There were no committee hearings or public vetting.

And that was the crux of the Court of Appeals ruling.

According to Coupal, “The second issue in the case has huge significance for taxpayers because of the potential for the tax-and-spend politicians to bypass other constitutional restraints related to the budget process.”

In 2010 Proposition 25 was passed, after being sold to voters as a way to end the annual budget deadlock. It changed the historical two-thirds vote requirement to only a simple majority vote to pass a budget.

“Seeking to use the language of Prop. 25, the Legislature slapped a token $1,000 appropriation in AB 1499 and then subsequently argued that bill only needed a simple majority vote,” Coupal wrote in the Flash Report Tuesday. “Without this scheme, AB 1499 would not have become effective until January 1, 2013, way too late to give Gov. Brown the political advantage he was seeking.”

But the Legislature’s ruse of a spot bill was easily spotted by the appeals court, which declared it illegal:

“The narrow, but potentially recurring and important, question we address in these writ proceedings is whether the California Constitution, as amended by the voters in 2010, allows the Legislature to identify blank bills with an assigned number but no substance (so-called “spot bills”) in the budget bill, pass the budget, and thereafter add content to the placeholder and approve it by a majority vote as urgency legislation. (Cal. Const., art. IV, § 12, subds. (d) & (e).) We conclude that spot bills which remain empty of content at the time the budget is passed are not bills that can be identified within the meaning of article IV, section 12, subdivision (e)(2) of the California Constitution and enacted as urgency legislation by a mere majority vote.” (emphasis added).

In its ruling, the Court held that the legislation which put Prop. 30 on the top of the ballot was unconstitutional.

“It doesn’t matter now, with the election over,” the San Francisco Chronicle reported. But it does matter.

According to Coupal, the next bill that lawmakers try to ramrod through the Legislature under the auspices of a “budget bill,” and without proper vetting, will be taken right back to court. “We will wait until they do a gut-and-amend, and take them back to court,” Coupal said. “This may not resolve Prop. 30. But the Legislature cannot simply add content to an empty ‘spot bill’ as a means to avoid the two-thirds vote requirement.”