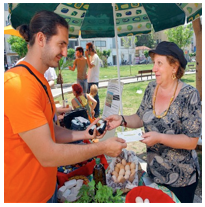 CERDAFIED - In the small port city Mount Pelion the market place is buzzing with activity. Shoppers and sellers are all making purchases and having a good day in the market without using a single euro.

They gave up on government solutions and took back their economic power by exchanging services and products. Bartering is nothing new.  Adopting your own currency … called the tern … that’s something new.

The Greeks lost 40% of their disposable income as a result of governmental policies imposed on them based on conditions of international aid. Government intervention has only worsened their crisis, so some savvy Greeks have taken back control.

The Greek government actively encouraged its citizens to find alternative methods to create opportunity and to sustain themselves while the debt burdened country began a debt buyback to raise their credit rating.

Organizers created an informal bartering network among 1,300 people who signed up to use the “tern” as their currency.  A tern is equal to one euro. The online community banking system is monitored exclusively.  And as more families and businesses fall on hard times more turn to the tern as a way to survive a deepening economic crisis.

Bartering with second hand clothes, homemade items, and services, while bypassing the over taxed monetary system, citizens are taking control over their economic future.  One of the great things about social media is how people can coordinate efforts, organize, and find ways to mutually benefit.

Greece failed to implement financial reforms and years of unrestrained spending caught up to them when the global meltdown landed in their back yard. Their debt levels and deficits exceeded the limits set by the Eurozone.

The European Union and European Central Bank are pushing austerity measures on Greece, but at least for the next 6 months they will be given time to focus on implementing tax collection measures and going after tax cheats. More pay cuts, tax hikes and slashed pensions are on the horizon. The Greek Parliament approved a $17.45 billion spending cut and tax hike plan.

Social unrest in Greece due to the crack down on tax evasion has authorities on edge. With only 30% of the tax inspections completed, Troika officials are pushing for compliance to their agreement. Strikes and riots brought down the previous government of then-PASOK Socialist leader George Papandreou.

In a country where the unemployment rate hit a European record of 26%, the tern is a godsend. While it may never replace bank notes, it’s a long term solution to long term depression. The market place is buzzing, and the art of negotiation is being resurrected and a younger generation is learning what the elders learned long ago. Everyone has something to offer and if you offer someone something they need, you will always get by. This idea can be duplicated, expanded, and improved. It may be our turn for tern.

As the weak and wobbly kneed governments in the EU try to keep its citizenry from revolting, while at the same time putting them in unemployment lines and facing tax hikes, one can only hope that the citizens waken and take control of a government that is no longer serving them.