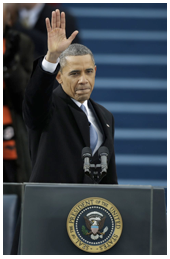 VISIONS - As the sun rises on his second inaugural, President Obama is already a significant figure in American history. And he is poised to become a legend within the Democratic Party.

He is the nation's first black president. He pushed a sweeping health care bill through Congress. And he got reelected. President Barack Obama is on a trajectory to be an inspiration to new generations of Democrats, in the mold of Kennedy and FDR.

Obama’s second term will be the crucible in which his legacy will either be burnished or brought down a notch.

"He had a legacy as something unique only in getting elected. He already had something," Robert Gibbs, the president's adviser and White House press secretary for the administration's first two years, told The Huffington Post.

"Regardless of what happened, he was always going to be something that was totally different," Gibbs said. "Now I think though he gets the real opportunity to add something other than election night in 2008 to that legacy."

But Obama’s second term will also put a spotlight on two tensions that are bound to grow. As the president begins to think about his place in history, he will be in unspoken competition with the man whose wife he defeated for the Democratic nomination in 2008, who may bid to succeed him in 2016.

And second, some of the biggest policy challenges of the president’s second term are going to require him to take on his own base.

The first point of friction is one that will consume political observers for years: Is former President Bill Clinton content to play second fiddle to Obama in the Democratic hall of icons? (Read the rest … including whether Obama is running against Clinton in the legacy wars … here)