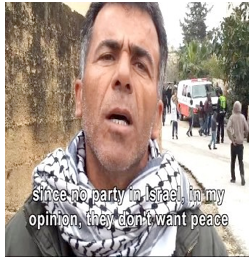 GIFT OF DEMOCRACY - In a move of high-tech civil disobedience, thousands of Israeli citizens are donating their right to vote in the upcoming parliamentary elections to their Palestinian neighbors via Facebook.

'Real Democracy,' so far has over 1,700 followers and is allowing Israelis to "donate" their votes for the Palestinian cause, giving their 'second-class' citizen neighbors an opportunity to participate in the general elections on Tuesday.

As a Palestinian living in the West Bank, Mousa Maria has no legal right to vote in Israeli elections this week. But thanks to a protest initiative, an Israeli voter will be casting a ballot for him.

He's participating in the "Real Democracy" project, a joint campaign launched by Israeli and Palestinian peace activists in which Israeli citizens "donate" their ballot to Palestinians.

Maria will be voting through Shahaf Weisbein for the Arab-Israeli party Balad. He asked Weisbein to vote for the party to show support for its embattled member Hanin Zoabi, who faced attempts to disqualify her from the Knesset last month.

"The Israelis tried to stop her from being a member of the Knesset and I think that she needs support, and if she knows that some Palestinians support her too it will make her feel stronger," Maria told AFP.

Weisbein announced on January 3 that she was donating her vote because "millions of Palestinians are affected directly by the decisions and acts of the government I am given the 'opportunity' to choose."

"This is not a democracy, it is an apartheid regime," she wrote on Facebook.

Shimri Zameret, a 28-year-old Israeli activist who helped come up with the initiative, is donating his vote to a 19-year-old Palestinian who has asked him to boycott the January 22 elections.

"I would prefer to vote, but I completely see it as a legitimate way to look at this," Zameret told AFP.

"It makes a lot of sense to say that this system is so illegitimate that to participate in it is to give it legitimacy."

The activists behind the initiative say it is intended to challenge a system they see as inherently undemocratic.

"The Israeli government rules the citizens of Palestine, but is not elected by them. That's undemocratic. Democracy means rule by and for the people," the group says in its mission statement. [...]

(This report written by the Staff at CommonDreams.org … where it was first posted.)