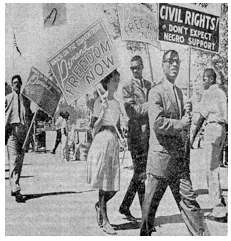 VOICES FROM THE SQUARE - In the mid-1950s, when I was a teenager, I moved with my family from Buffalo, New York to Los Angeles. I’d spent my early years on the Lower East Side of New York and had lived all my life in apartments.

In Los Angeles, we lived in a house in Highland Park with a backyard and a tree. It was a modest home, with only two bedrooms, so my parents put up a partition wall in the living room to make a third bedroom, which became mine.

It was the first house my dad, a tool and die maker, and mom, a clerk for Los Angeles County, ever bought. The Depression had made them cautious about large purchases.

I knew both my parents—my father especially—had once been active on the left, but that was all behind them by the time we moved to Los Angeles. I, too, had little interest in politics or activism of any sort.

Franklin High School, just a few blocks from our house, kept me busy with other things. I loved books and the arts, I liked my ceramics teacher, and I also took part in the drama club. The student body, as I remember it, was all white, and I don’t recall having any black classmates.

I’m Jewish and relatively dark-skinned, so when we performed the play Arsenic and Old Lace, I got cast as the maid. None of this occasioned much reflection at the time. (Read the rest … including how a rally in the Sports Arena changed the author from picketer to freedom rider … here.)