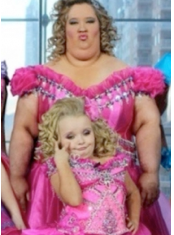 It is as compelling as watching a train wreck…more like a redneck train wreck…or maybe I should say a redneck RV wreck – one that would make National Lampoon’s Christmas Vacation’s cousin Eddie proud.
So what’s the point of comparing the IQ of the City Council (and I may as well add the City Controller and mayor) to Toddlers and Tiaras’ star Alana Thompson’s mom June Shannon?
Do I really have to explain?
OK – here goes.
It was recently reported that June Shannon established a trust fund for her daughters, including Alana, that will invest the earnings the family receives from the show. That’s right, as much as they may “holla for a dolla,” they will have to wait until they are 21 before they touch the money.
“Hot damn” – as they say in the deep south – she gets it!
She should have been the mayor of Los Angeles for the past eight years. You see, Ms. Shannon understands the concept of matching revenues with future needs. In the case of the Thompson family, she does not want to spend current cash receipts on pleasing her children today at the expense of their future.
On the other hand, our current elected officials have spent lavishly on compensation at the expense of infrastructure and other long-term needs of the city family.  That family happens to be the residents who live and work here – not just the ones on the city payroll - many of whom do not even live in the city.
It is no surprise, then, that Council Members Englander and Buscaino have proposed a $3 billion bond to cover many years of neglected maintenance of the city’s streets, the debt service to be covered by property owners.
Before I simply dismiss Englander and Buscaino as a pair of white shoes matched with a pastel leisure suit, they are simply doing the bidding of the mayor, City Controller and their colleagues on the City Council. I am sure Council President Wesson selected them to carry the water since they might otherwise pass as fiscally concerned. Certainly, none of the other signers of measure - Tom LaBonge, Jose Huizar, Paul Krekorian and Paul Koretz - have anything resembling financially responsible credentials. They are the pastel leisure suits.
Mama June apparently knows the true meaning of a balanced budget. By contrast, we have been told year after year that the city has approved balanced budgets.  The bond proposal is proof positive that those assertions have been lies. It is an admission that there has been an unfunded liability of at least $3 billion, and that’s without the sidewalks.
Who will be the members of the Council introducing a bond measure to pay for the unfunded pension liability?
There is no end in sight to this game. We have been taken by a bunch of fast-talking rednecks.
While I cringe at some of June Shannon’s other parenting skills, thank God for Honey Boo Boo that her mom has some financial common sense.
When we vote in March, we have choices.
Let’s not elect a Wendy Greuel Greuel for mayor or a Denny Boo Boo for controller.
(Paul Hatfield is a CPA and serves as Treasurer for the Neighborhood Council Valley Village.  He blogs at Village to Village, contributes to CityWatch and can be reached at: phinnoho@aol.com) –cw
CityWatch
Vol 11 Issue 5
Pub: Jan 15, 2013