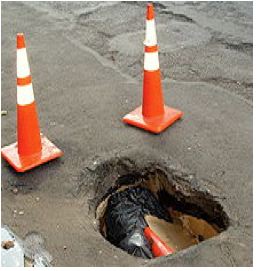 LA WATCHDOG - Our Council Members are without doubt some of the smartest guys in the world.  And you do not even have to ask them.  They will demonstrate their extraordinary intellect by their actions.

How else do you explain why the all knowing City Council needs less than four weeks to slap a $4.5 billion tax increase on the ballot without allowing the Neighborhood Councils, homeowner associations, business owners, apartment owners, commercial landlords, and all other property owners to have adequate time to review, analyze, and comment on this massive, 30 year assault on their wallets?

But that is why the charter-authorized Neighborhood Councils have called for a 60 day cooling off period so that they have adequate time to review and analyze the fiscal impact report (that is yet to be prepared) and hold Brown Act compliant meetings so that they can advise the City Council pursuant to the terms of the City Charter.

There is no doubt that our streets, the second worst in the country, need lots of love, attention, and money.  But this massive public works program cannot be developed in the bowels of City Hall by the Elected Elite, the City’s bureaucracy, and all their self serving cronies.

We must have an open and transparent process.

On Wednesday, after the song and dance show by Council Members Mitch Englander and Joe Buscaino, the two sponsors of the Los Angeles Emergency Local Street Safety and Traffic Improvement Measure (the “Street Measure”), and Nazario Seuceda, the Director of the Bureau of Street Services, City Council President Herb Wesson wisely deferred consideration of this matter until Tuesday, January 15, in the hope that the City will produce a fiscal impact report and a more detailed implementation plan.

This $3 billion street reconstruction project will be financed through ten annual issuances of $300 million of 20 year bonds and will be repaid over the next 30 years, with the last payment in 2043! As a result, the total cost of this project, including interest, will approach $4.5 billion.

But rather than financing this project with a regressive parcel tax, the City will tax our property based on its assessed value. This will increase our property taxes for the next 30 years by an average of $150 million a year, or 3.8%.  The annual payments will peak at $250 million, a 6% increase, in 2024.

And once again, just like with the unfunded pension liability, we are burdening the next generation of Angelenos with the failure of the City to maintain its streets over the past decade.

For example, what is the true status of our streets and is it prudent to rely solely on the Bureau of Street Services that is under the thumb of the Mayor, the City Council, and the politically appointed Board of Public Works?  Or does it make sense to get an independent assessment of the status of our streets?

And why have our streets been underfunded?

Very simply, our self-serving Elected Elite short changed our streets and sidewalks (and every other City program and service) to finance the $1.3 billion increase in labor costs over the last seven years.

There is also serious concern about whether the Bureau of Street Services, Engineering, and Contract Administration have the technical, operational, financial, and management expertise and experience to bring the “largest public infrastructure project in the country” in on time and on budget.

The City also will establish a Citizens Oversight Committee to advise the City Council on the program implementation.  But who will be on that committee and how independent will it be? Or will it be a lap dog like we experienced at the Los Angeles Community College District?

The City also claimed that once our streets are reconstructed, we will never have to worry about failed streets again.  But how does the City intend to finance the Bureau of Street Services in the future to make sure that our streets are properly maintained?

There are other claims that need to be clarified, such as the preposterous assertion that this street reconstruction program will create 30,000 private sector jobs over the next decade and will not involve a buildup of the City’s work force.

The City also needs to answer the question why the streets (and sidewalks for that matter) should not be the responsibility of the General Fund. Rather than tagging property owners with a $4.5 billion tax increase, the City ought to consider other methods to finance our streets, including from the savings from outsourcing the City’s operations to more efficient service providers.

While the City Council may be foolish enough to place the Street Measure on the ballot, the odds of this measure obtaining the approval of two thirds of the voters are slim, especially given the complete lack of trust and confidence in the Elected Elite and their cronies that occupy City Hall.

The Neighborhood Councils are right to demand that the City Council postpone any decision on the Street Measure for 60 days as there are too many unanswered questions and outstanding issues.

We shall see whether the light bulbs on the City Council are bright enough to follow this common sense advice from their constituents.