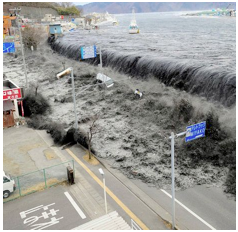 CERDAFIED - For many decades, the United States explored weather warfare as an option. The success of the atomic bomb had sidetracked all the efforts to control the weather, at least for a while. A top-secret project, code-named ''Project Seal',' was being funded by the US and supported by New Zealand.

New Zealand author and film-maker Ray Waru came across a series of Project Seal reports that were being vetted by an unnamed man. The man described “project Seal” as “the best kept secret of World War II’ and revealed the attempt to make a tsunami bomb.

In 1968, the US Office of Naval Research sponsored a report called, "Handbook of Explosion-Generated Water Waves. Volume I – State of the Art.” The report hypothesized that a large explosion could generate waves that could damage coastal communities and islands.

The environmental modification (ENMOD) weapon was revealed in Waru’s well documented book, “Secrets and Treasures.” His research found, US naval officer, E A Gibson, had noted the large waves produced after blasting coral reefs near the Pacific islands in June of 1944. These observations led to “Project Seal”.

The authors of the naval research report concluded that a tsunami bomb was relatively inefficient because the continental shelf would dissipate most of the wave energy. Calculations anticipated using 2 million kilograms of explosives at a distance of 8 km from shore could create a wave capable of great destruction along the coast. The conclusion of top-secret work, by the late Professor Tom Leech, has been analyzed by several independent sources.

With targets like Japan, an invasion would follow the tsunami, because the fortified coasts would be rendered useless. After the declassified documents were analyzed in 1999 by the University of Waikato, according to a New Zealand Herald’s report, it was determined that the devastating weapon could be viable.

A bomb was secretly tested off the coast of Auckland many decades ago and it could be developed to produce a devastating wave up to 30m high. "But one of the things we discovered was if you had a series of explosions in the same place, it's much more effective and can produce much bigger waves," said Dr. Willem De Lange of the Department of Earth Sciences, Univ. of Waikato.

Nuclear scientist Leuren Moret, worked at the Lawrence Livermore Nuclear Weapons Laboratory on the “Yucca Mountain Project.” She became a whistle-blower in 1991 after reporting science fraud on the project and at Livermore.

In a 2004 Japan Times article, Leuren Moret warned that an impending disaster was in store for Japan, if they did not change their nuclear power policies. Nearly ten years later, she showed that Japan's devastating earthquake and tsunami was manmade, and the result of an ENMOD weapon.

Many scientists and activists have followed HAARP (High frequency Auroral Research Program) activities. The online site detailed when testing was under way and the duration of testing. Warnings have been issued by activists and scientists and with great accuracy. The tell tale signs of HARRP activity would reveal where these bounced waves were penetrating clouds, leaving circular holes in the clouds. Using a triangle formula, much like the shape of the HARRP  transmitters, one could calculate the center of the HARRP target. Within moments of the activity, storms emerged across America with devastating results. Tornados and hurricanes form before your eyes, increasing in intensity as the HARRP electromagnetic energy heats the

The HAARP Research Station is on an Air Force owned site near Gakona, Alaska. It is funded US Air Force, the US Navy, the University of Alaska and the Defense Advanced Research Projects Agency (DARPA).

It is no coincidence that we are experiencing mega storms, the largest of the century. We are not the only country using this technology. At least six other known sites exist and operate. We are left to wonder if it’s manmade or divine providence. Are we suffering the results of our own technology or of others?

If you’re asking yourself, “why would we turn our weapons on ourselves”, you only need to look at the results of Hurricanes Katrina and Sandy. One million people dispersed and homeless by Katrina and 650,000 by Sandy. Prime land that was not restored to the owners or rebuilt for the most part.

Repeating this pattern of storm devastation, how could the government or the insurance companies provide relief and compensation? Who will benefit from this land grab?  Who would declare these coastal areas unsafe for future building?