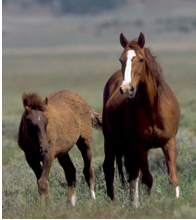 THE POWER OF ONE - In a previous CityWatch column, I wrote about the plight of America’s wild horses, and the battles that community organizations have waged against the federal government’s Bureau of Land Management to prevent these majestic animals from being rounded up and sold for slaughter in Canada and Mexico.

The column provided CityWatch readers with a link to an online petition that called upon the Secretary of the Interior, Ken Salazar, to “place an emergency stop to the sale, roundup, and removal of wild horses until a humane and transparent management program is implemented that guarantees the safety of the American wild horses.”

The public’s response was extraordinary.  By the self-imposed November 7th deadline, 35,011 people had signed the petition, exceeding the goal of 25,000 set by the authors, the American Wild Horse Preservation Campaign.

That led to the creation of several petitions at Care2’s website, www.thepetitionsite.com, that call for President Obama to fire Salazar.

Another free public petition site, www.change.org has reported a success story regarding the wild horses.

Eleven year-old Robin Warren from Las Vegas (aka Wild Mustang Robin) started a petition to stop wild horses from being sold for slaughter.   She was motivated by the success that her friend had using Change.org to force Jamba Juice to stop using Styrofoam cups.

Robin’s petition was endorsed by more than 113,000 people, and she won.

The Secretary of the Interior announced changes in the way wild horses are sold, including restrictions on the number of horses one person can buy and penalties if any of them wind up being sold for slaughter.

Robin is proof that change can begin with just a single person, even a student.

The lesson here for Los Angeles’ neighborhood councils is the need to create action plans to achieve victories.

Many neighborhood councils are good at taking positions on the issues that affect their stakeholders, but many lack the will or ability to push the ball those last few yards into the end zone.  Change requires more than voting and going home.

Using any one of the free online petition sites, neighborhood councils have a quick and easy way to put some muscle behind their words.  The petitions can be directed to the mayor, the City Council, or anyone.

Maybe this is an argument for allowing teenagers to serve on boards if they’re the ones most ready, willing, and able to generate results.

It’s unlikely that city hall will lead any effort to make city government more accessible, so maybe the neighborhood councils can do it.

In an ideal world, neighborhood councils would lead an effort to create a formal online petition process for city hall.

Although it’s not the only one to do it, the Scottish Parliament uses a system that allows a single person to submit a petition online and get a response.

After a petition is received, it is reviewed by a committee of seven ministers who decide the appropriate action to take, which could include inviting the organizers to testify at a committee meeting.

It’s somewhere between disturbing and concerning to compare the Scottish desire to give the public a voice in its democracy, and the hissy fit thrown by the Los Angeles City Council when the neighborhood councils dared to suggest that petitions created from three of its boards should cause the creation of a City Council file that, in reality, could end up being totally ignored by an unresponsive government.

The next column will present some tips about creating the most effective petitions and generating support.