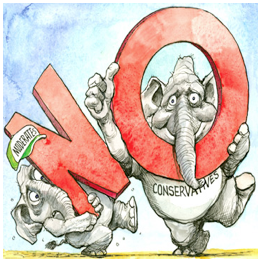 CALITICS - If you read Calitics at any time between 2007 and 2010, you'd have seen a site focused on the same problem now facing the country as a whole: how to keep a government, an economy, and a society functioning in the face of Republican obstruction. The latest nonsense surrounding the so-called "fiscal cliff" shows that the House Republicans have learned well from their Sacramento counterparts.

The method is the same: make Democrats do what they otherwise would not do by threatening to block passage of crucial legislation, then up the ante by rejecting initial deals and demanding even more once Democrats have shown they will make concessions to avoid the predicted disaster that comes with legislative inaction. The resulting deals were destructive to the state's economy and safety net, worsening the already bad financial and social crisis.

For a long time, Sacramento Democrats argued they had no other choice. We heard from Speakers of the Assembly and Presidents of the Senate that unless concessions were made to obtain Republican votes, budgets would not be passed and people would suffer. Republicans made good on their threats and delayed budgets - the 2008-09 budget was three months late.  Now we're watching a similar script play out in Congress.

Here in 2013, California is in a very different place - precisely because of the lessons learned from the era of Republican obstruction. Voters approved a tax increase to help schools. The state budget is headed toward surplus. Budgets are passed on time and without hostage tactics. State government is starting to become functional again.

That did not happen by accident. It happened because Democrats and progressives decided they had enough of Republican obstructionism and developed a plan to stop it for good. The plan included smarter legislative tactics, but the real keys were changes to the political process as well as an unprecedented organizing effort, all aimed at the same core goal: restoring political power to the people, not allowing it to remain concentrated in an extremist fringe.

The first step requires being honest about how politics now works. Another veteran of those California political wars, David Atkins, observed that expecting Republicans to act rationally is to misunderstand how the party operates:

The Republican electoral chips are stashed safely in gerrymandered hands, and any losses over fiscal cliffs or debt ceilings only hurt the President and the nation's perception of government. There's no downside for the GOP in bluffing every time in the hopes that the President will fold. Why not? When you're playing with house money, it makes sense to go all in on every hand.

This realization led California Democrats and progressives away from focusing on the specifics of a deal and toward the kind of process and political changes that would end the obstructionism for good. Once it was realized the problems were deeper, people started working on the lasting solutions.

In 2009, after yet another bad budget deal, progressive organizations began meeting to plan the way out. Everyone agreed that the rule requiring a 2/3 vote of the legislature to pass a budget was a key part of the problem, as it gave Republicans leverage. Getting rid of that rule became a top priority for the 2010 ballot - with majority rule, Democrats would never again have to make deals with Republicans to pass a budget.

But it was also agreed that the electorate had to be expanded. Nobody knew what kind of electorate would show up in 2010, and Meg Whitman was already making it clear she would spent as much as it took to try and win the governor's race. Public confidence in the Legislature was at an all-time low, creating conditions that Republicans could potentially have exploited to win more seats, particularly if the 2010 electorate was more conservative than the historic 2008 electorate.

So work began on mobilizing hundreds of thousands of new and infrequent voters among the progressive base. Many of these voters were people of color, and many were low income. Their values were progressive, but since Democrats and progressive organizations had generally failed to reach out to them, they were not a regular part of the electorate.

The Democratic Party under its new chair John Burton and its new executive director Shawnda Westly pursued this on one track while the progressive coalition led by labor unions pursued the same goal on their own track - to be clear, this wasn't coordinated, and no laws were violated in the process.

Progressive organizations, websites like Calitics, and an increasing number of Democratic elected officials also began adopting similar messaging. They pointed out that Republicans did not share California's values, that they were willing to destroy the state to impose their extremist values on a population that did not want them, and that the only answer was to take away their power to do that. It was made clear to people that problem wasn't bad legislators unwilling to "come together" but that a group of extremists had used loopholes to block good things from happening and to cause people harm.

The result was that in 2010 California bucked the red tide that hit nationally. Democrats won huge victories, sweeping all statewide offices and taking back the governor's office by a 13-point margin. Prop 25 passed by an even larger margin, ending the annual Republican hostage tactics on the budget. This was the result of the voter mobilization efforts that had begun in 2009.

The coalition for change did not stop there. In 2012 the progressive groups continued their voter mobilization work, this time to beat back the anti-union Prop 32 and to pass the Prop 30 tax increase.

That mobilization in turn helped elect a Democratic supermajority, leaving Republicans with no more political power of any kind in state government.

They were helped in their work by a late but pivotal voter registration innovation. In September 2012 the Secretary of State's office announced online voter registration was available. Over 1 million people registered online, and many of them were the younger and diverse voters that are key to a progressive future.

The supermajority victory was also enabled by a change that the Democratic and progressive groups had originally opposed. Redistricting reform passed at the 2008 election in the form of Prop 11, and was upheld by voters in 2010 when a repeal effort reached the ballot. I was one of many progressives who opposed this reform.

But the work of the Citizens Redistricting Commission proved me wrong. It ended a 20-year Republican-friendly gerrymander, creating fair districts that reflected modern demographic realities. Republicans now had to defend turf that had previously been artificially safe, and as a result they lost four Congressional seats to Democrats, along with the Democratic supermajority in Sacramento.

To stop the extremists in the House GOP from destroying what remains of America's safety net and obtaining their dream of drowning government in a bathtub, a similar path must be followed nationally. David Atkins, now chair of the Ventura County Democratic Party, laid out the rules that need to be changed to stop extremist obstruction. Notice the similarities to the list that worked in California.

The only thing that allows Republicans to take their hostages in the first place is a series of arcane rules that give the minority undue influence. Among those rules are:

California's problems are not solved, not by a long shot. There's still a lot of work to do to repair the damage from 35 years of a right-wing tax revolt and the inequality it helped create. But the opportunity to fix those problems now exists. The nation as a whole will not be able to overcome extremist obstructionism and have a chance to solve deeper problems until these types of changes are pursued.

Progressives should continue to pay close attention to the details of any deal in Congress, and continue to organize around them. But it's time to pursue the bigger changes that are needed to put an end to the obstruction, to fix the broken parts of the American system of government that the extremists have been exploiting.

(Robert Cruickshank blogs at Calitics.com where this column was first posted.)  -cw