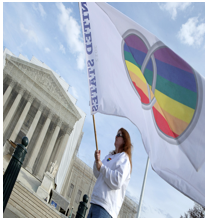 GAY RIGHTS - The Supreme Court says it will hear two days’ worth of arguments over laws affecting gay marriage during the last week of March.

Justices on Monday announced they will hear arguments in Hollingsworth v. Perry (Prop 8) on March 26 and United States v. Windsor on March 27.

The court scheduled one hour’s worth of arguments on each day. Justices can still extend the amount of time given to arguments in each case, however.

(This is an Associated Press report.)