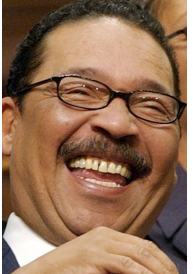 2013 - The "LA Shuffle" isn't a dance, or at least not one of the musical variety, but rather a name that some political insiders apply to the constant movement of politicians in Los Angeles County, which has more than a quarter of the state's population.

The county has all or parts of 18 of the state's 53 congressional districts, 15 of the 40 state Senate districts and 24 of the 80 Assembly districts. There are also 15 well-playing slots on the Los Angeles City Council, the city's mayoralty and five seats on the county's Board of Supervisors.
With that many political positions as lures and term limits as spurs, there's a lot of movement among Los Angeles, Sacramento and Washington in any election year, whether it's the even-numbered year for federal, state and county balloting or the odd-numbered year for city elections.
Five members of the Los Angeles City Council are former state legislators, including the council's president, Herb Wesson, a former speaker of the state Assembly but one, Tony Cardenas, is leaving to take a seat in Congress, which will mean a special election next spring for his seat.
Eight odd-numbered city council seats are up in the spring as well, and five current or recently termed-out state legislators are running for them. Were state Sen. Curren Price and Assemblyman Bob Blumenfield to win their council races, the new Democratic supermajorities in both legislative houses would be diminished until their seats are filled by special election. (Read the rest … including how many County Supervisors are doing the LA Shuffle … here.)
-cw
CityWatch
Vol 10 Issue 104
Pub: Dec 28, 2012