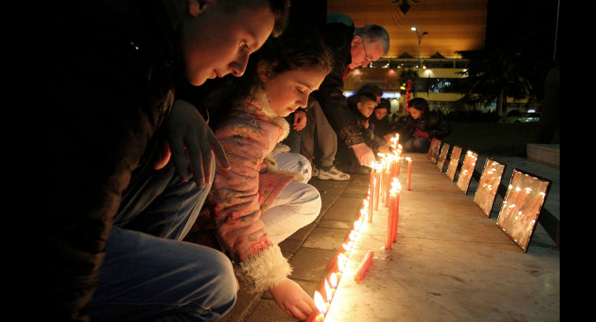 NEWTOWN REVEALS US - The horrendous news from Newtown, Connecticut has pierced our hearts. A black-clad man in his 20s armed with two semi-automatic handguns entered the Sandy Hook Elementary School and made an elementary school for kindergartners through fourth graders the scene of the worst mass shooting in a public school in American history. Twenty children were shot and killed, and seven adults were shot and killed. Some were wounded. We do know dozens of parents are experiencing the worst nightmare any parent could imagine. We do know more than 500 young children in the school are traumatized.
Once again we are faced with unspeakable horror from gun violence and once again we are reminded that there is no safe harbor for our children. How young do the victims have to be and how many children need to die before we stop the proliferation of guns in our nation and the killing of innocents?

The most recent statistics reveal 2,694 children and teens were killed by gunfire in 2010; 1,773 of them were victims of homicide and 67 of these were elementary school-age children. If those children and teens were still alive they would fill 108 classrooms of 25 each. Since 1979 when gun death data were first collected by age, a shocking 119,079 children and teens have been killed by gun violence.
That is more child and youth deaths in America than American battle deaths in World War I (53,402) or in Vietnam (47,434) or in the Korean War (33,739) or in the Iraq War (3,517). Where is our anti-war movement to protect children from pervasive gun violence here at home?
This slaughter of innocents happens because we protect guns before children and other human beings. Our hearts and prayers go out to the parents and teachers and children and the entire Newtown community that has been ripped apart by each bullet shot Friday morning.
We know from past school shootings and the relentless killing of children every day that Newtown families and the community will never be the same. The Newtown families who lost children today will never be the same. The families of the teachers who were killed will never be the same. Every child at the Sandy Hook Elementary School this morning will never be the same.
Each and all of us must do more to stop this intolerable and wanton epidemic of gun violence and demand that our political leaders do more. We can’t just talk about it after every mass shooting and then do nothing until the next mass shooting when we profess shock and talk about it again.
The latest terrible tragedy at Sandy Hook Elementary School is no fluke. It is a result of the senseless, immoral neglect of all of us as a nation to protect children instead of guns and to speak out against the pervasive culture of violence and proliferation of guns in our nation. It is up to us to stop these preventable tragedies.
We have so much work to do to build safe communities for our children and need leaders at all levels of government who will stand up against the NRA and for every child’s right to live and learn free of gun violence. But that will not happen until mothers and grandmothers, fathers and grandfathers, sisters and brothers, aunts and uncles, and neighbors and faith leaders and everybody who believes that children have a right to grow up safely stand up together and make a mighty ruckus as long as necessary to break the gun lobby’s veto on common sense gun policy. Our laws and not the NRA must control who can obtain firearms.
It is way past time to demand enactment of federal gun safety measures, including:
● Ending the gun show loophole that allows private dealers to sell guns without a license and avoid required background checks;
● Reinstating the assault weapons ban that expired in 2004;
● And requiring consumer safety standards for all guns.
Why in the world do we regulate teddy bears and toy guns and not real guns that have snuffed out tens of thousands of child lives? Why are leaders capitulating to the powerful gun lobby over the rights of children and all people to life and safety?
I hope these shocking Connecticut child sacrifices in this holy season will force enough of us at last to stand up, speak out, and organize with urgency and persistence until the president, members of Congress, governors and state legislators put child safety ahead of political expediency. And we must aspire and act together to become the world leader in protecting children against gun violence rather than leading the world in child victims of guns. Every child’s life is sacred and it is long past time that we protect all our children.
Albert Camus, Nobel Laureate, speaking at a Dominican monastery in 1948 said: “Perhaps we cannot prevent this world from being a world in which children are tortured. But we can reduce the number of tortured children.” He described our responsibility as human beings “if not to reduce evil, at least not to add to it” and “to refuse to consent to conditions which torture innocents.” It is time for a critical mass of Americans to refuse to consent to the killing of children by gun violence.
(Marian Wright Edelman is President of the Children's Defense Fund and its Action Council whose Leave No Child Behind® mission is to ensure every child a Healthy Start, a Head Start, a Fair Start, a Safe Start, and a Moral Start in life and successful passage to adulthood with the help of caring families and communities. This response to the tragedy at Newtown was posted first at HuffingtonPost.com)
-cw
CityWatch
Vol 10 Issue 101
Pub: Dec 18, 2012