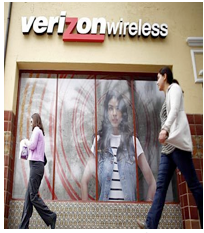 VOICES - Sometimes it just has to go back, whether it's a new IPhone or the shirt that looked a lot better in the dressing room.  However, a little known profit center for companies this holiday season appears to be the hefty restocking fee that many national retailers charge for returning unused and unopened items.
While the holidays are a time of giving, some retailers are “giving” it shoppers with hidden fees.

Recently I purchased three brand new cell phones and a home phone system from a Verizon Wireless store in Moorpark, CA.  The helpful sales assistant verbally disclosed the fact that a 2-year sales extension was required in order to get lower prices on new phone equipment, but failed to orally disclose the $35 fee for returning any of the devices unopened and unused.  In the case of the Roses, Verizon Wireless slammed them with a $35 charge for the return of one item, an item that they can put back on the shelves for immediate resale.
The restocking fee terms were not adequately disclosed to me and therefore I was not able to make an informed purchasing decision.  When I complained that the fee was not verbally disclosed, the Manager of the Verizon Wireless Moorpark store responded with “you signed the paperwork and we assume you read the contract and there is nothing anyone at Verizon can do”.  Only after complaining to Verizon Wireless media relations group did the company agree to waive the charge.
In California, like several other states, consumers must be made aware of restocking fees prior to making their purchase. However, the law does not mandate how customers are informed of the fee before being forced to sign an array of documents in order to complete the purchase.
Because restocking fees are imposed at fixed prices and without regard to the actual costs of “restocking” the merchandise, the practice of imposing restocking fees without full disclosure by companies like Verizon Wireless appears to be only intended to create an additional source of revenue for the company.
Restocking fees vary. Amazon charges consumers 20% for unopened media items. Unlike Amazon, most items purchased at Best Buy are not subject to a restocking fee after being opened. Sears charges a 15% restocking fee for electronics without their packaging or accessories.
Americans are doing a significant amount of their holiday shopping in these few weeks, and it is important they be made fully aware of hidden fees and charges, such as the one that Verizon Wireless imposes for restocking.  If it is important enough for Verizon salespeople to be trained to orally tell customers that a lower price requires a contract extension, they should also be trained to tell customers that the moment they walk out the store they are stuck with the device they purchased even if it is unused or unopened --- unless they want to give Verizon $35 for the “privilege” of returning the device.
All companies should want to have an informed customer base and there is no good business reason for their salespeople not to fully disclose all fees.  Having that knowledge up front will allow customers to decide whether they want to do business with that mandate restocking fees and then hide behind paperwork to make millions of dollars from unsuspecting consumers.
Lawmakers should pass legislation that requires proof that consumers are informed verbally about restocking fees and the fees should be based on real costs. Putting something back on the shelf should cost $35.  Let’s hope that companies will come to their senses and stop gouging consumers who are trying to make a simple return.
As consumers finish their holiday shopping, it is critical to check the return policy applied to each purchase so you know exactly how it works.
(Eric W. Rose is a public affairs consultant and Partner at Englander, Knabe & Allen.)
CityWatch
Vol 10 Issue 101
Pub: Dec 18, 2012