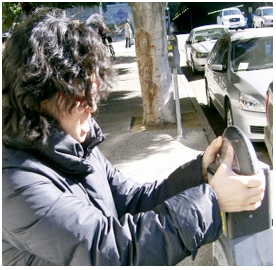 PARKING POLITICS - It’s difficult to avoid the conclusion that “it’s no use fighting City Hall”, but the advent of the Internet and Neighborhood Councils has allowed us to choose that very option—so it’s anyone’s guess as to whether fighting the unfair City law ticketing individuals who use parking spaces with broken meters, and fighting this City’s unenlightened parking policy, is either courage or naiveté at its best … or worst.