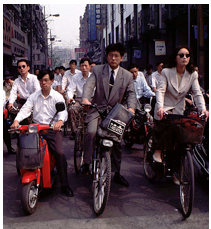 BEGREEN - It had been four years since I was last in China; right after the 2008 Beijing Olympics. Back then, in July and August, it was hazy, hot, and humid. Now, while the temperature was considerably cooler, the poor air quality seemed to be about the same.
Between 2008 and this trip, I had started biking again and being back on the saddle had become something of an obsession. Maybe it was the perpetual gridlock on LA's streets, the full-blown reality of climate change, or the expanding spare tire I'd grown since turning middle-aged. Whatever the reason, being a biker, the loss of that quotidian pleasure was something I was going to miss while away.