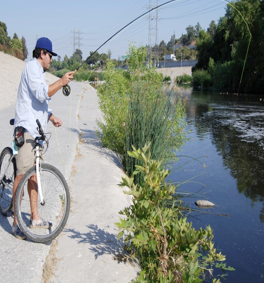 LA WATCHDOG - On Tuesday, the Board of Commissioners of our Department of Water and Power will approve the transfer of $246,534,000 of Ratepayers’ money to the City’s General Fund.
But this haul does not appear to satisfy the voracious appetite of City Hall for the Ratepayers’ cash.

At its meeting on November 20, the DWP Board of Commissioners approved a Cooperative Agreement with the Department of Public Works where DWP will “invest” a maximum $1.2 million over the next three years to support the implementation of the Los Angeles River Revitalization Master Plan.  This is in addition to the $5.25 million that has already been provided to fund the first three phases of this very ambitious plan.
The long term Master Plan calls for the “revitalization of the 32 miles of the Los Angeles River and adjacent businesses and neighboring communities.  The goals are to provide retail space and housing; enhance water quality; and improve the environment, water resources, and the ecological functioning of the LA River.  The Los Angeles River Revitalization Plan includes master planning, governance proposals, economic development proposals and modeling, and 239 proposed projects that could be implemented as part of the Master Plan, all of which will require development prior to implementation.”
While a revitalized LA River may contribute greatly to our local economy, our environment, and the quality of life in Los Angeles, should DWP and its Ratepayers foot the bill for the implementation of the Los River Revitalization Master Plan?
Despite all the flimsy arguments from the political establishment supporting this expenditure, the answer is very simple. No.
Going one step further, just imagine the price tag for Ratepayers when it comes time to finance the 239 proposed projects envisioned by the Los Angeles River Revitalization Master Plan, a number of which will be hare brained schemes cooked up by the light bulbs and their cronies that occupy City Hall.
No doubt, this would include Council Member Ed Reyes’ $1.1 billion pipe dream to bury miles of high voltage transmission lines along the LA River.
In yet another assault on the DWP’s coffers, on December 11, the City Council will approve the DWP’s plan for a $25 million floating cover for the Elysian Park Reservoir in order to comply with water quality standards mandated by Environmental Protection Agency regarding open reservoirs.
As part of this plan, DWP and Ratepayers are also going to be hit up for an additional $16 million in “enhancements” and “mitigations” that were demanded not only by local activists, but other political constituencies throughout the City.
Of course, this pork laden alternative is preferable to the $110 million buried reservoir plan that was supported by Council Members Ed Reyes and Eric Garcetti.
But like Looney Tunes, That’s Not All Folks.
On October 29, the DWP Board of Commissioners held a joint meeting with the Board of Public Works to review the City’s Water Integrated Resources Plan.  This ambitious IRP involves not only DWP’s expensive efforts regarding water conservation and recycling, but the City’s responsibilities for wastewater and stormwater.
While it makes sense for the various departments of the City to coordinate their efforts and resources, it also appears that the City is preparing yet another raid on DWP’s treasury (and ultimately the wallets of the Ratepayers) to finance obligations that are the responsibility of Public Works, Recreation and Parks, and other City departments.
Unfortunately, the raids on the DWP piggy bank are not confined to the LA River, Elysian Park, and the City’s Water Integrated Resources Plan.
Over the past seven years, Mayor Villaraigosa and the City Council have increased the Transfer Fee to 8% from 5% of Power System revenues, resulting in an additional $100 million “contribution” by Ratepayers to the City’s General Fund.
We are also getting soaked for the $250 million IBEW Labor Premium every year as a payback for the generous campaign contributions by IBEW Union Bo$$ d’Arcy.
We are still funding the numerous City employees (and their $200 million of transferred pension liabilities) that were dumped on the DWP as part of the City’s efforts to downsize its General Fund work force.
We are footing the bill for the Headworks Reservoir and River Supply Conduit, the $500 to $750 million pet projects of Eric Garcetti and Tom LaBonge designed to finance the local park surrounding the Silver Lake and Ivanhoe Reservoirs as well as preserve the million dollar views of the politically powerful residents.
There are numerous other pet projects: the IBEW Joint Training and Safety Institutes; the loans to Street Services for LED lighting; financing parks and museums for the Department of Recreation and Parks; the Fiber Optic Network that DWP purchased from the City at an inflated price; and funding the maintenance of the Fire Departments hydrants.
At the same time that the City is ripping off Ratepayers, the Herb Wesson City Council has voted to place on the ballot a measure to increase our sales tax to a mind boggling 9.5%, the proceeds of which will fund about 70% of the $300 million increase in General Fund salaries, benefits, and pension contributions next year.
But rather than approve this $215 million increase in the sales tax, Ratepayers must demand greater transparency of the relationship between DWP and the City.
Furthermore, the City Council, its Energy and Environment Committee headed by Jose Huizar, and the Finance and Budget Committee chaired by Paul Krekorian must cease and desist from raiding our Department of Water and Power and taxing hard working Angelenos without their approval.
Instead, the City Council must seek voter approval of the $246 million Transfer Fee as required by Proposition 26 (The Supermajority Vote to Pass New Taxes and Fees Act) that was approved by California voters in November of 2010.
So the message is very simple: no more pet projects, greater transparency, and voter approval of the 8% Transfer Fee.  Otherwise, forget about increasing our sales tax to 9.5%.
(Jack Humphreville writes LA Watchdog for CityWatch. He is the President of the DWP Advocacy Committee,  the Ratepayer Advocate for the Greater Wilshire Neighborhood Council, and a Neighborhood Council Budget Advocate. Humphreville is the publisher of the Recycler Classifieds -- www.recycler.com. He can be reached at: lajack@gmail.com)
-cw
CityWatch
Vol 10 Issue 97
Pub: Dec 4, 2012