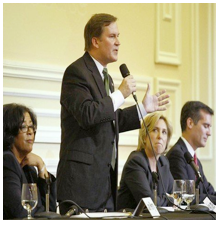 PERSPECTIVE - Now that former Mayor Riordan’s proposed pension reform charter amendment has fallen off the pension cliff, who will carry the banner and make it and other financial challenges a real issue in the Los Angeles mayoral race?

If you watch the video of the candidate forum sponsored by the CD5 Homeowners’ Association you can’t help but come to the conclusion that former US Attorney and radio commentator Kevin James is the only major candidate who takes seriously the threat of adverse financial consequences    associated with the city’s failure to deal with its structural deficit.
Kudos to CD5 HOA President Marcia Selz and Ron Kaye for conducting a real forum, unlike many others where the questions are the equivalent of throwing softballs to Barry Bonds.
Throughout the forum, the most overused word coming from the mouths of the three candidates who currently serve as elected officials – Garcetti, Greuel and Perry – was “looking”, as in looking for solutions.
The three have each served multiple terms on the City Council; Gracetti was also the Council President and Greuel rose to City Controller.  Perry serves as current Council President, Wesson’s personification of Hester Prynne, relegated to endure his wrath for defying the social order he imposes.  They have had plenty of time to look for solutions for the ever-growing fiscal hole caused by employee benefits and deferred costs (such as unused LAPD overtime and neglect of basic infrastructure).
Whatever they were looking for over the years has not produced results.  Retirement benefits alone will absorb 50% of the city’s general fund in a few short years, according to Chief Administrative Officer Miguel Santana.  I guess that prospect is not compelling enough to motivate the three seasoned politicians to take the bull by the horns and enter into serious labor contract negotiations with the city’s unions, as James suggests.
Jan Perry at least alluded to bankruptcy without using the actual term when she pointed to the dangers of relying on a judge to solve the pension mess. Eric Garcetti all but admitted we faced bankruptcy when the Council raided special funds to prop up core city services. Yet they have not posed any substantive solutions to the city’s chronic deficits. Raising the retirement age for new employees (Garcetti crowed about that change) and nominal increases in contributions will not make a dent for decades. Net revenue estimates from the elimination of the business tax are unproven estimates, even if they attract enough new business to a city that can’t even fix sidewalks or maintain the streets.
Greuel constantly reminded the audience that she is the City Controller.  It reminded me of Richard Nixon’s “I am the President” assertions that help launch David Frye’s career.  Some of her responses were more along the line of “I’m not a crook”. She denied having any responsibility for the special fund raid simply because she was not on the City Council when it occurred. Note to Greuel: as controller you are supposed to know about these things and take action to protect the assets of the city.  At least Garcetti and Perry apologized for condoning the misappropriation.
Greuel’s standard response in the forum was “I have identified $150 million in waste, fraud and abuse.”  Another note to Greuel: identification counts for zero unless you take the City Council to task for not implementing recommendations either timely or, for that matter, at all.  Instead, she’s pretty chummy with them. She doesn’t want to risk making waves for fear of losing political capital; that’s about the only capital she cares for.
So, voters,” look” twice before you commit to candidates who represent the status quo.
(Paul Hatfield is a CPA and serves as Treasurer for the Neighborhood Council Valley Village.  He blogs at Village to Village, contributes to CityWatch and can be reached at: [email protected]) –cw
CityWatch
Vol 10 Issue 97
Pub: Dec 4, 2012