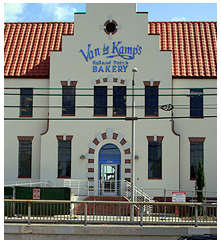 VOICES - Wednesday (December 5, 2012), the Board of the Los Angeles Community College District (LACCD) is expected to accept the City of Los Angeles’ decision to prematurely terminate its lease of the historic Van de Kamp Bakery Building at the Glassell Park/Atwater Village campus after only 19 months of occupancy.