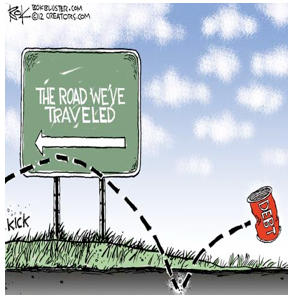 LA WATCHDOG - Now that the Riordan Plan for pension reform is off the table, how do the “can kickers” that occupy City Hall propose to balance the budget, fix our streets, and fully fund our pension plans that are $19 billion underwater?
Under the Riordan Plan, the City would have saved about $400 to $500 million a year within five years, thereby eliminating the Structural Deficit - where over the next four years, the projected increases personnel costs (salaries, pension contributions, and medical benefits) of $768 million exceed the growth in revenues by almost $300 million.
This does not include $135 million of savings for DWP and its Ratepayers.

At the same time, the City would have been able to devote $600 million a year to the amortization of the unfunded pension liability, an amount that is already built into the current pension plan contributions.
The City tells us that its two pension plans, The Los Angeles City Employees Retirement System and the Fire and Police Pension Plans, have an actuarial unfunded pension liability of $9.5 billion, implying a funding ratio of 74%.
However, when you value the $25 billion investment portfolio at market prices, the funding ratio drops to 68% and the unfunded liability increases to $11.5 billion.
When you use a more realistic investment rate assumption of 5.5%, the level earned by the Fire and Police Pension Plans over the last eight years, as opposed to the overly optimistic rate of 7.75%, the unfunded pension liability balloons to almost $19 billion, representing a financially dangerous funding ratio of only 57%.
Needless to say, pension contributions are escalating, chewing up more and more resources, resulting in the further deterioration of our streets, sidewalks, parks, trees, and the rest of our infrastructure.
Next year, the City is projecting pension contributions of $950 million, an increase of $90 million.
But this contribution has already been lowered by over $100 million through the underhanded manipulation of the assumptions that determine the Annual Required Contribution.  For example, the City has lowered the rate of healthcare inflation contrary to recent trends and lengthened the recognition of over $2 billion in investment losses by extending the “smoothing” period from five to seven years.
The City is also “saving” another $150 million by “phasing in” over a three to five year period the actuarial assumptions that were adopted in 2011.
The City is also shortchanging the City’s two pension plans by another $500 to $600 million as a result relying on the overly optimistic investment rate assumption of 7.75%.
So what are the candidates for Mayor doing about the $19 billion unfunded pension liability and the low ball pension contributions that are “saving’ the City more than $800 million a year!
Eric Garcetti, the knee jerk critic of the Riordan Plan for pension reform, is proposing to grow the City’s economy and create jobs by eliminating the gross receipts tax on businesses.  But the City Administrative Officer does not support this multiyear tax cut since our cash strapped City does not have resources to fund this politically motivated initiative.
Wendy Greuel has not presented any concrete proposals, but more than likely, will throw some waste, fraud, and abuse pixie dust on the problem and make it all go away.
Jan Perry at least had the honesty and courage to recommend that the City enter into public private partnerships for the Convention Center and the Zoo and require City employees to increase their contributions to help cover their medical and pension benefits.
Only Kevin James, the outsider and former federal prosecutor, endorsed Mayor Riordan’s plan for pension reform which would have eliminated the Structural Deficit and saved DWP Ratepayers at least $135 million a year.
He is also the only candidate who supports the LIVE WITHIN YOUR MEANS charter amendment that would require the City to develop and adhere to a Five Year Financial Plan, pass two year balanced budgets based on Generally Accepted Accounting Principles, and over the next 10 years, fix our streets (and the rest of our infrastructure) and fully fund the City’s pension plans.
The City Council will proudly claim that they have adopted the Mayor’s Retirement Security Plan.  But this penny ante attempt at reform saves only $15 million in the fifth year, about 1% of the projected $1.3 billion pension contribution in 2017.
The increasing desperate Herb Wesson led City Council is also proposing to raise $215 million by increasing the City’s sales tax to 9.5% to offset the projected $216 million budget deficit.
But in reality, the morally bankrupt Elected Elite and their cronies are continuing to “kick the can down the road” to insolvency, continuing to loot the City’s pension plans through systematic underfunding so that they can finance the out of control escalation in salaries, healthcare costs, and retirement benefits.
The time has come when Angelenos must “kick the cans” of the candidates for Mayor, Controller, City Attorney and City Council and demand that they tell us how they are going to balance the budget, fix our roads, and fully fund the City’s two pension plans.
We must also demand that these candidates endorse charter reform where the City will be required to LIVE WITHIN ITS MEANS.
Until that time, our only remedy is to vote NO on the proposed increase in the sales tax to a mind boggling 9.5%.
(Jack Humphreville writes LA Watchdog for CityWatch. He is the President of the DWP Advocacy Committee,  the Ratepayer Advocate for the Greater Wilshire Neighborhood Council, and a Neighborhood Council Budget Advocate. Humphreville is the publisher of the Recycler Classifieds -- www.recycler.com. He can be reached at: lajack@gmail.com)
-cw
CityWatch
Vol 10 Issue 96
Pub: Nov 27, 2012