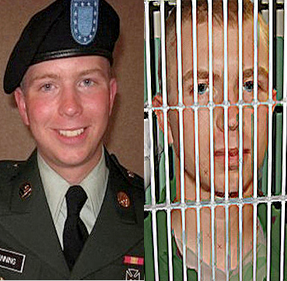 CERDAFIED - Three Nobel Peace Prize Laureates collaborated in writing an article for the guardian.co.uk this month, honoring Bradley Manning, the US soldier who is facing life in prison for allegedly having leaked hundreds of thousands of state secrets to WikiLeaks.
Adolfo Pérez Esquive, Mairead Corrigan-Maguire, and Archbishop Desmond Tutu stated; “We Nobel Peace Prize laureates condemn the persecution Bradley Manning has suffered, including imprisonment in conditions declared "cruel, inhuman and degrading" by the United Nations, and call upon US citizens to stand up in support of this whistleblower who defended their democratic rights.”

Americans are torn by Bradley Manning’s actions. They understand the conscientious objector status that permeated the Vietnam war era. It appears clean cut to object to war as a religious or spiritual belief as opposed to enlisting in the military and attempting to undermine its goals and objectives.
PFC Bradley Manning accepted responsibility for his actions but clarifies that his action was not espionage, nor aiding the enemy, but was instead an act of conscience.  Which leads us to ask the question; Can military personal object individually to the actions or orders of their commanders, and do so without facing retaliation or reprimand?  When does free will and conscience prevail over military command?
Clearly a vast number of soldiers have suspended their own moral values in order to survive military combat. One can’t help but recognize that the repercussions of not following your innate sense of right and wrong shows up as post traumatic stress disorder. Whilst your memories of war may fade, your rational self is still struggling to understand your acquiescence. The process of recovery spans a life time, from innocent young men, to expendable tools of the military complex.
To complicate the issue further, the “Nuremberg Principles” asserts that, “The fact that a person acted pursuant to order of his Government or of a superior does not relieve him from responsibility under international law, provided a moral choice was in fact possible to him.”
The European Court of Human Rights and international law, recognize that conscious objection to military service may be necessary if the force doesn’t pursue “the common good”. Here a soldier is being asked to decide if the war he is about to support with life and limb is for “the common good”. Our youth may be easily swayed by political propaganda and a muzzled media prior to military action.
Once you enter the war you may discover your sworn allegiance “to support and defend the Constitution of the United States against all enemies, foreign and domestic” may be best achieved by transparency not war.
Adolfo Pérez Esquive, Mairead Corrigan-Maguire, and Archbishop Desmond Tutu emphasized, “With today's advanced military technology and the continued ability of business and political elites to filter what information is made public, there exists a great barrier to many citizens being fully aware of the realities and consequences of conflicts in which their country is engaged. Responsible governance requires fully informed citizens who can question their leadership.”
They assert that, “Revealing covert crimes in Iraq and Afghanistan and corporations' pervasive influence in governance, this window into the realities of modern international relations has changed the world for the better.”
Bradley Manning’s actions were based on a hope that the released documents would bring about discussion, debate and reforms. His motivation was revealed in a chat log between Adrian Lamo and Manning, though he was clearly conflicted about his actions.
• “i dont believe in good guys versus bad guys anymore… i only a plethora of states acting in self interest… with varying ethics and moral standards of course, but self-interest nonetheless.”
• “i had always questioned the things worked, and investigated to find the truth… but that was a point where i was a *part* of something… i was actively involved in something that i was completely against…”
• “its important that it gets out… i feel, for some bizarre reason ..it might actually change something”
• “hopefully worldwide discussion, debates, and reforms…if not… than we’re doomed as a species.. i will officially give up on the society we have if nothing happens”
• “i want people to see the truth… regardless of who they are… because without information, you cannot make informed decisions as a public”
• “maybe im just young, naive, and stupid”
• “information should be free….it belongs in the public domain”
Manning has been nominated twice for the Nobel Peace Prize. As a whistleblower, he has suffered greatly for his decision to submit material to WikiLeakes. Acting according to his moral conscious, he has paid a high price, but a smaller price than the soldier who acquiesces to morally objectionable acts and who has to live with it for a life time.
Since Manning’s release of the secret documents, no evidence has been presented by the prosecution, that Manning injured anyone or put them in harms way. They say his motives are irrelevant. But I can think of nothing more relevant than a person’s motivations. Misguided as they may be…we most certainly should be measured by our motivations…as the court of law considers it.
Though some think of Manning as a traitor, Adolfo Pérez Esquive, Mairead Corrigan-Maguire, and Archbishop Desmond Tutu believe, “If Bradley Manning released the documents attributed to him, we should express to him our gratitude for his efforts toward accountability in government, informed democracy and peace.”
Manning knew that internationally recognized human rights were being violated and his objection lead him to seek official action to prevent it, receiving no satisfaction from his superior, he acted as an ordinary citizen and disclosed it to an international community through WikiLeaks as a whistleblower.
I am left to wonder….Are we expecting too much from our enlisted youth, who in the prime of their innocence, are shown the vicious reality of their government? Can they make Solomon like decisions about what is morally objectionable or the unfortunate but justifiable results of war?
Can any of us?
● To follow the court case: Bradley Manning Support Network
(Lisa Cerda is a contributor to CityWatch, a community activist, Chair of Tarzana Residents Against Poorly Planned Development, VP of Community Rights Foundation of LA, Tarzana Property Owners Association board member, and former Tarzana Neighborhood Council board member.) –cw
CityWatch
Vol 10 Issue 96
Pub: Nov 27, 2012